Pikeville minister felt the need for worship despite adversity

PIKEVILLE, Ky. (Kentucky Today) – Even though Will Stepp’s home was flooded with 2 feet of water and his chest was heavy and hurting, he felt the need to praise the Lord. 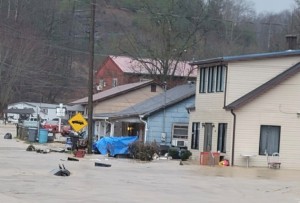 The blue house is the Stepp’s, which was flooded during heavy rains Saturday.

So the pastor of Amazing Grace Worship Center did just that Sunday morning.

They worshiped in the storm not out of a sense of obligation but a simple sense of praising God. Earlier Saturday he had told his wife, Jeanie, that he was going to cancel church. But less than two hours later, he told her they needed to worship.

“I felt the need in me to congregate, I needed to fellowship, I needed to worship,” Stepp said. “We have to be that guiding light to the church but, more than anything else, I needed to have church.”

His wife agreed with him that it wasn’t the time to be canceling church even while they were suffering.

“As the shepherds of this flock, me and my wife tag-team this,” Stepp said. “I said, ‘Honey, I think we need to have church.’ She said no at first and then she said, ‘You know what, we need to praise the Lord. We need to set the example. Just because you’re getting hammered doesn’t mean you can’t worship the creator. We need to be worshiping the Lord.’’’

So that’s what they did. It was a small crowd, he said, but a worshipful experience.

The pastor was short of breath and still having chest pains Sunday night when he and his wife went to the hospital. Stepp was having a heart attack, with 99 percent blockage. He had a stent put placed Monday and was feeling much better despite his new salt-free diet.

“God’s keeping His protective hand over us,” Stepp said. “I think he’s got something for this ministry to do.”

When Stepp was looking at becoming pastor of the church, he told them they first needed to become affiliated with the Kentucky Baptist Convention. Jason Lowe, the associational mission strategist of the Pike Association, spoke to them about what needed to be done.

They agreed and was one of eight new church affiliations approved by membership at the KBC at November’s annual meeting.

“They had been a Southern Baptist church once upon a time and used LifeWay material,” Lowe said. “When he started preaching for them, he said if you want me to be part of this church, you need to become a member of the Pike association and the Kentucky Baptist Convention. I met with them, started talking to them, telling them about the Cooperative Program. Over series of several meetings, they agreed to it.”

Kentucky Baptist Disaster Relief assessors came to the pastor’s home on Saturday and friends came to their aid with food, clothes, help salvaging what they could and prayers.

Stepp’s wife put a heartfelt comment on Facebook to thank so many who came to their aid from the flood.

“There are no words to describe what happened to us,” she wrote, saying losing their two oldest dogs was harder than losing everything else. “But the Lord blessed us to come out and not lose our lives.”

Friends came with food, clothes and helped them salvage what they could from the house. “We love each and every one of you and we can never express how much you mean to us,” she wrote.

Lowe has been with a Disaster Relief assessing team from West Virginia. He said they have 10 homes that have signed up for assistant through Disaster Relief, including the Stepps. They will begin working there on Tuesday.

Stepp wasn’t sure it could be salvaged since it had so much water. They are going to be living in his stepdad’s home on Bent Branch, about five minutes from where they live now.

He said his wife was up and down the night of the flood checking the water levels. They both began checking around 6 in the morning, Stepp said, and it wasn’t long until the water was seeping into the home.

Lowe was one of Stepp’s first calls on New Year’s Day. Kentucky Disaster Relief assessors came to the pastor’s home on Saturday.

Lowe has been with a Disaster Relief assessing team from West Virginia and said they have 10 homeowners who have signed up for assistance through Disaster Relief, including the Stepps. They will begin working there on Tuesday, he said.

Stepp wasn’t sure it could be salvaged since it had taken on so much water. They are going to be living in his stepdad’s home on Bent Branch, about five minutes from where they live now.

Regardless, the Amazing Grace pastor is still singing that during the storm.