State, Fayette may be in COVID plateau, Europe may point to holiday surge

FRANKFORT, Ky. (WTVQ) – The state’s fight with the COVID virus continues to struggle to continue the downward slide as the state’s positivity rate remains stuck just above 5% Thursday. 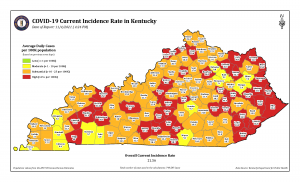 In the state’s Thursday report (click here), Gov. Andy Beshear announced 1,398 newly reported cases of COVID-19 and a positivity rate of 5.03%. The governor also reported 30 deaths, including the loss of Kentuckians only 23 and 25 years old.

The 30 deaths pushed the number of people lost to COVID-related causes to 9,886.

The numbers continue to suggest the state may be plateauing rather than declining and some other health experts agree.

“This may be our new normal, at least for now…I’m not really expecting it to go down much for now,” Humbaugh continued, noting the majority of cases and deaths continue to be in unvaccinated people.

He also raised a red flag about the future, noting that since the pandemic began, the state and nation have general followed a month or two behind Europe.

“We generally follow Europe. It looks like case counts are increasing there. We tend to follow a month or two behind…that would be our holiday period so we will have to see and watch that,” Humbaugh warned.

Hospitalizations were at 765 Thursday, up from 762 Wednesday but still below last week’s numbers.

A total of 217 people are in intensive care, down from 232 Wednesday. Like hospitalizations, the numbers are below last week but only by about 50 patients.

Also, 133 people are on ventilators, down from 137 Wednesday and down only about 10 from last week.