'Fleeceworks Royal' is the early leader at the Kentucky Horse Park

LEXINGTON, Ky. (WTVQ/NEWS RELEASE) -Tamra Smith had a long trip from California to make it to Kentucky, but Fleeceworks Royal made it worth her while by stepping out as the early leader in the CCI5*-L competition at the Land Rover Kentucky Three-Day Event presented by MARS EQUESTRIAN™.

The gray Holsteiner mare owned by Judith McSwain took the lead with a score of 32.9, but she’s less than a point in front of second-placed Colleen Rutledge on Covert Rights who scored 33.8. Doug Payne on his 2020 Tokyo Olympic mount Vandiver stand third with 34.9.

“I was really happy with her. She was with me the whole way and I was thrilled with her, she was awesome,” Smith said.

Smith has ridden “Rory” since she was 3, after McSwain bought her from her breeder Charlotte Wrather. She is the full sister to a previous Kentucky competitor, Kristi Nunnink’s R-Star.

“I’ve had her since she was 3, so it’s kind of crazy. Every time I’m going out of the start box at Advanced, I’m like ‘but you’re 3.’ It’s special to be sitting on one you’ve produced from scratch, and you think of all the times and the many people she’s bucked off,” Smith said with a laugh.

Rutledge and Payne also have long-term relationships with their horses. Rutledge bred Covert Rights out of her first advanced mare and Payne’s horse Vandiver is still part-owned by his breeder.

“It feels amazing, to be sitting up here on my homebred out of my first advanced mare. He’s a blast to ride every day no matter what, … he’s amazing to ride and he puts a smile on my face every day. I’m having a great time this week so far and that’s what this is all about,” Rutledge said.

“It’s super special, and it’s cool all of us up here are on U.S-bred horses,” Payne added. “(Vandiver’s breeder and part-owner) Debi (Crowley) is with us, and it’s a crazy experience to be able to share their dream, so we’re trying to savor it.”

Friday kicks off with another day of dressage, but these riders have already started turning their eye to Saturday’s cross country course, designed by Derek di Grazia, which promises to be a significant test.

“There are a lot of questions throughout that will be challenging and the way in which its set up, we will see a lot of different solutions to same problem. It requires you to be super sharp and reactive and it’s an instinctive test rather than mathematical,” Payne said.

“The courses are definitely very reactionary … but that’s what a good cross country rider and horse are,” said Smith. “Derek is very clever in how he manages to make something that doesn’t seem like it will, ride hard, so you have to be super focused and never let your guard down.”

“Derek is a genius — this is going to separate those that wannabe from those that are and you’ve got to be able to ride not just off your eye but your leg and your butt,” Rutledge said. “Every fence asks something a little bit different, but everything he asks is clear.( Asking) one or two questions makes it hard but (asking) every single one makes relentless, it’s going to come down to the last fence, I don’t think there’s a gimme fence out there.”

Earlier in the day in the CCI4*-S the USA’s Elisabeth Halliday-Sharp put in two epic performances to take the two top spots after the first day of dressage. She was first in the ring with Cooley Quicksilver, but didn’t let that intimidate her as she and the Monster Partnership’s 11-year-old gray Irish Sport Horse gelding danced into the lead with a score of 25.7.

“He’s a very good horse but quite a quirky, wiggly horse,” said Halliday-Sharpe. “I had a thought after Pau last year, ‘what can I do with this horse to make him better?’ And I worked hard, and made him stronger, and he was very professional in the ring. His good work now is very good. I’m really proud of him, he tried hard for me and dug in. First (to go) is not where want to be, but I couldn’t be more pleased.”

Halliday-Sharpe’s second horse, the ebony Cooley Moonshine, a contrast to his silver stablemate, also impressed the judges to slide in to second place on 26.8. The black Irish Sport Horse is also owned by The Monster Partnership. California-based Helen Alliston and her own Ebay stands third on 28.7.

“They are extremely different horses,” Halliday-Sharp said. “Moonshine is less experienced, but I believe he is a world class horse. He can be nervous in the ring, but he’s beautiful and can do a lot of things well. If he loses it anywhere it’s in the walk, he gets a little tense, but was a total pro in there and I think he’s coming along the right way.”

Halliday-Sharp has a third horse yet to compete in the CCI4*-S, with Cooley Be Cool doing his test on Friday. She was vocal in her support of this addition to the line-up at the Land Rover Kentucky Three-Day Event presented by MARS EQUESTRIAN™.

The Land Rover Kentucky Three-Day Event presented by MARS EQUESTRIAN™ (LRK3DE), April 28-May 1, 2022 at the Kentucky Horse Park in Lexington, KY, hosts one of only seven annual Five Star three-day events in the world. The event also hosts a CCI4*-S as well as the $225,000 Kentucky CSI3* Invitational Grand Prix presented by Hagyard Equine Medical Institute. Known as “The Best Weekend All Year,” the event annually attracts more than 80,000 spectators who also enjoy extensive shopping, a variety of hospitality experiences and a wide array of demonstrations.

The Land Rover Kentucky Three-Day Event is a thrilling multi-day competition featuring Olympic-level riders and horses in what can best be described as an equestrian triathlon. Horse and rider pairs compete in three phases of the competition – Dressage, Cross-Country and Show Jumping. The Five Star riders compete for their share of $375,000 in prize money as well as a shot at the $350,000 Rolex Grand Slam of Eventing, which is awarded to any rider who wins the Land Rover Kentucky, Badminton and Land Rover Burghley Five Star Events in succession. LRK3DE is the longest-running Five Star event in the Americas and as the United States’ premier event, also serves as the Land Rover/USEF CCI-5*-L Eventing National Championship presented by MARS EQUESTRIAN™ for the U.S. athletes.

The $225,000 Kentucky CSI3* Invitational Grand Prix presented by Hagyard Equine Medical Institute takes place on Saturday, April 30, at 6:00 p.m. after the cross-country portion of the LRK3DE. As part of the competition, there will also be a $37,000 Welcome Speed Cup Ranking Class on Friday in the Rolex Stadium, after the day’s LRK3DE dressage competition.

Further information about the Land Rover Kentucky Three-Day Event and the Kentucky CSI3* Invitational Grand Prix is available at www.kentuckythreedayevent.com. 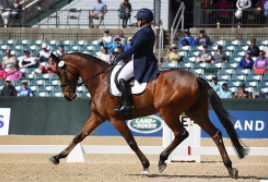 Kentucky Derby winner 'Rich Strike' will not run in the Preakness

KHRC: All post-race drug tests from Kentucky Derby and Oaks came back clean

For first time since pandemic hit, Keeneland to be at full capacity Derby Day