LEXINGTON, Ky. (WTVQ) — If the corn song has been stuck in your head since its debut on TikTok, you’ll surely want this shirt, too.

Shop Local Kentucky released a parody T-shirt Thursday, titled “It’s Corn-tucky Tee” which features an ear of corn and the words “it’s corn” with more text bubbles adding “it has the juice!” and “big lump with knobs!” rightfully created after the corn song blew up on TikTok. 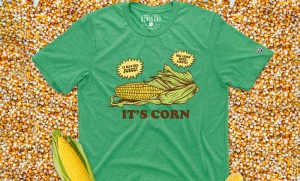 Recess Therapy, an account on TikTok that interviews people, first conducted the now-viral interview of the young boy professing his love for corn about a month ago.

In the video, you can hear the boy start off by saying “For me, I really like corn” and the interviewer replying “What do you like about corn?”

The boy replied, “Ever since I was told that corn is real, it tasted good…but when I tried it with butter, everything changed.”

The interview went on, with the boy saying he couldn’t “imagine a more beautiful thing” than corn. And that interview has since turned into a viral song, a meme — and now, a T-shirt.

The Shop Local Kentucky website says it currently has only five shirts in stock as of publishing time. The Facebook post of the T-shirt is gaining traction, with hundreds comments from people saying they want (or…need) the shirt.

U.K fans camp out to get their Big Blue Madness tickets