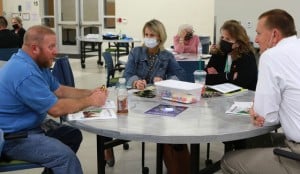 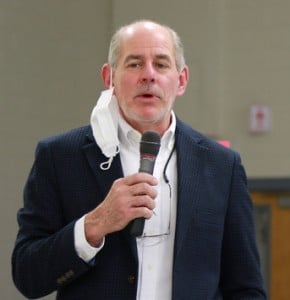 FRANKFORT, Ky. (WTVQ/Press Release) – When Adam Watson, the digital learning coordinator at Shelby County Public Schools (SCPS), was interviewing a parent as a part of their Local Laboratory of Learning (L3) empathy interviews, one statement stuck with him the most.

“The parent shared how their child always had anxiety about the big, annual, end-of year-test,” he said. “One of the moments when the parent was trying to talk through the anxiety with them, the child said, ‘But mom, but what if I found out from the test that I am stupid?’

“That was the wow moment for me. To that student, despite whatever other assessments, great interactions with peers and teachers that could confirm what the student knew and could do, in the end, in their mind, they wouldn’t have been shocked at all that this test would tell them they weren’t as smart as they thought they were.”

Watson is a part of the Shelby County L3. L3s are designed to be partnerships between a school district, parents, students, educators and others who have the greatest awareness of the needs and desires of the local community. These community-based partners will work together to create a more equitable future for education in Kentucky.

L3s are the local version of the Kentucky Coalition for Advancing Education (KCAE), a large and diverse group comprised of more than 50 parents, teachers, school leaders and community members from across the state. KCAE conducted empathy interviews in spring 2021 about what kind of education system Kentuckians wanted to see. The information from those interviews, the Commissioner’s Virtual Listening Tour and the Keep, Start, Stop survey was used to create a report called “United We Learn: Hearing Kentucky’s Voices on the Future of Education,” which also is available in Spanish.

The heart of the United We Learn initiative is to move the conversation about learning and accountability from the state and federal systems to the local level. Shelby County is one of  the seven L3s across the state. While most of their work has been done virtually,  the Shelby County L3 met in person on Dec. 2 at Southside Elementary School to begin thinking about what accountability and assessment could look like for their students.

Shelby County’s Chief Academic Officer Susan Dugle said SCPS is focused on “taking it to next level and making education not just school-based, but community-based.” Dugle also served as a member of the Kentucky Coalition for Advancing Education.

Each one of the L3s are co-led by a local school district administrator and a prominent community leader to help communities and schools work together during the design process. The Shelby County L3 is led by Dugle and Mike Hesketh, a community member and business owner of Superb Industrial Power Coating. They also are supported by the Kentucky Department of Education (KDE), the Center for Innovation in Education and the University of Kentucky’s Next Generation Leadership Network.

Some L3s are focusing on what the local community sees as the “profile” of their local graduate. Shelby County already completed its “Profile of a Graduate” during its current four-year strategic plan. SCPS aims for graduates to be a critical thinker, a responsible collaborator, a lifelong learner, an effective communicator, a global citizen and an inspired innovator. Students complete reviews of these competencies in 5th, 8th and 12th grade through their Personalized Learning Plans.

The Shelby County L3 is now focusing on what it means to make their school a hub for the community and expand relational and public trust, a theme addressed in the United We Learn report.

“We can see a future of the state where the school is the hub,” said Hesketh. “Making the hub of the community is a major change, an exciting change. The chance for us to do this, and to picture our schools as the place our community goes to for everything, is something we are pretty excited about.”

The group worked on further refining the problem their coalition would like to address relating to assessment and accountability. The group chose to focus viewing the problem through the lens of students and the community at large. A significant part of their discussion focused on how current accountability and assessment measures from the federal and state levels don’t acknowledge the whole student.

“The tests the students take are the same ones. It doesn’t matter if you moved from Guatemala last week and don’t speak any English, you still have to take a couple of questions on the test. It’s the same no matter what. If you have a reading disability, it doesn’t matter,” said Dugle.

Jennifer Cox, principal at East Middle School and parent of a Shelby County student, believes students aren’t motivated to do well on standardized testing because it isn’t relevant to them.

Watson agreed and said, “Education is done to them and not with them.”

There were no students in attendance at the meeting, but Dugle helped the group keep their voice in mind by reading feedback from the empathy interviews. Students in Shelby County are focused on getting their basic needs met, concerned about a lack of communication or follow-up and feel anxious from school pressures and testing. SCPS is working on ways to make it easier for students to contribute, such as coordinating student focus groups during school hours that will allow for more student input to the L3.

To move beyond current systems of accountability and assessment, Erin Dennis, a teacher at West Middle School, believes that true partnership would require a “shared space.”

“The community wants a shared space that is equitable for a kid’s education. Right now, we have a hard time communicating all the time with families and families communicating back and feeling that shared space,” she said. “It could be physical. It could be a true shared space emotionally, that we are here as a partnership. It’s not ‘You drop your kids off and I’ll do my best then I’m going to send them to back to you and we’ll blame each other.’ It’s a shared commitment.”

Baptist Corbin delays due to weather