PARIS, Ky. (WTVQ) – The Shawhan Baptist Church in Paris has its bell back, thanks to an anonymous community member.

According to the Bourbon County Sheriff’s Office, the bell was returned sometime over the past couple day anonymously and “in good faith by an honest citizen.”

The sheriff says the person who returned the bell bought it from someone they didn’t know. Apparently, the person realized it belonged to the church and purchased it to return it.

The person who returned the bell hasn’t provided their name due to fears about being involved with stolen church property, according to the sheriff.

PARIS, Ky. (WTVQ) – A church community in Paris is asking for the return of its call to worship.

The Shawhan Baptist Church on 455 Mt. Carmel Road in Paris had its church bell stolen sometime between Sunday, Oct. 24 and Wednesday, Oct. 28.

The bell was attached to a four-by-four post outside of the church and was rang every Sunday before services. It was donated by a community member and was cast in the 1880’s. 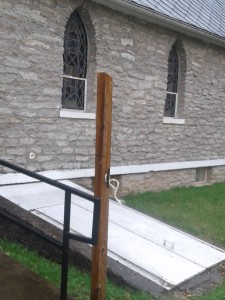 According to the church, someone took a chainsaw, cut the post and took the bell.

The church community just wants the bell back and asks whoever took it to return it with no questions asked.