MARIUPOL, Russia (AP) – Russian airstrikes hit three hospitals in Ukraine on Wednesday, including two west of the capital and a maternity hospital in the besieged port city of Mariupol, where 17 people were wounded in what Ukrainian officials labeled a “war crime” and an “atrocity.”

The attacks came amid hopes for mass evacuations of civilians from several besieged Ukrainian cities, including Mariupol, which has been without food, water and power for days and which started burying bodies in a mass grave because its morgues are full.

Russia, without evidence, accused Ukraine of having chemical weapons labs. White House press secretary Jen Psaki called Russia’s claim “preposterous” and said it could be part of an attempt by Russia to lay the groundwork for using such weapons of mass destruction itself against Ukraine.

Here’s a look at key things to know about the war:

ARE CIVILIANS BEING SAFELY EVACUATED?

Ukrainian President Volodymyr Zelenskyy said efforts were being made Wednesday to evacuate some 18,000 people from embattled towns in the Kyiv region to the capital itself. Speaking in Russian, he appealed to Russian soldiers to save themselves and “just go home.” 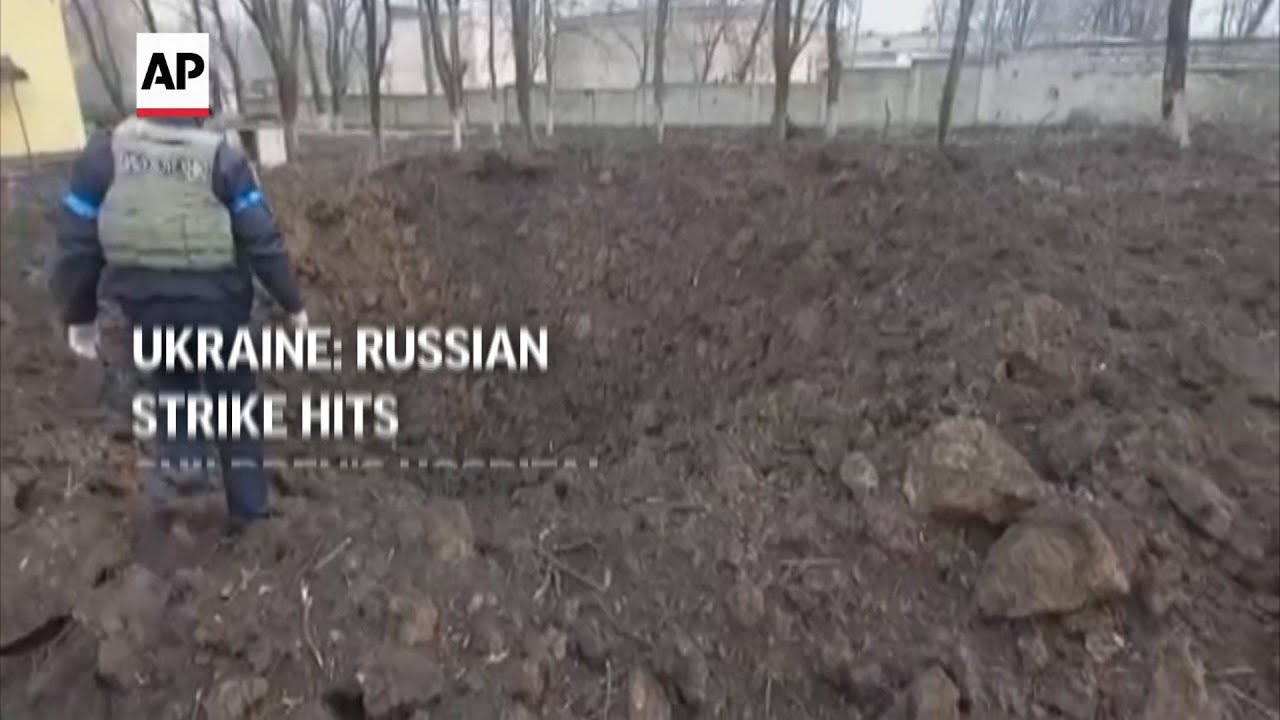 Zelenskyy said late Wednesday that about 35,000 civilians have used humanitarian corridors to flee the fighting.

“We are praying that it will be possible to take people out of Mariupol,” he said.

WHAT HAS THE AP DIRECTLY WITNESSED OR CONFIRMED?

In AP video of the airstrike on the maternity hospital, thunderous bangs were followed by the sounds of glass breaking and car alarms going off as smoke rose from beyond a nearby building. Outside of Mariupol Hospital No. 3, a woman holding a small child cried uncontrollably while a Ukrainian soldier bandaged another woman’s head.

Rescue workers evacuated the injured down a staircase, including a pregnant woman. Her face was pale and she grabbed her belly before she was loaded into an ambulance. There was a massive crater on the hospital grounds and debris everywhere.

British Prime Minister Boris Johnson said on Twitter that Russian President Vladimir Putin will be held “to account for his terrible crimes.”

“There are few things more depraved than targeting the vulnerable and defenseless,” Johnson tweeted.

Zelenskyy said the strike trapped children and others under the rubble.

Workers in Mariupol on Wednesday continued hastily and unceremoniously burying scores of dead civilians and soldiers in a mass grave dug in a cemetery in the heart of the city.

With morgues overflowing and corpses uncollected in homes, city officials decided they couldn’t wait to hold individual burials. Forty bodies were placed in the grave Tuesday and at least 30 more were put there Wednesday, though the number was rising so quickly that the total became unclear.

Some were brought wrapped in carpets or plastic bags. Workers quickly made the sign of the cross after pushing the bodies into the common grave. No family members or other mourners were there to say goodbye.

Civilians from towns northwest of the capital made their way toward Kyiv on Wednesday through a humanitarian corridor, with firefighters and police helping people carry their animals and belongings across a damaged bridge.

WHAT ELSE IS HAPPENING ON THE GROUND?

Russian aircraft bombed Zhytomyr, a city of 260,000 west of Kyiv, hitting two hospitals, including a children’s hospital, Mayor Serhii Sukhomlyn said on Facebook. He said the number of casualties was still being determined.

“A children’s hospital. A maternity hospital. How did they threaten the Russian Federation?” Zelenskyy asked in his nightly video address.

Artillery fire continued pounding the suburbs of Kyiv and Kharkiv, the country’s second largest city, on Wednesday. A police headquarters was destroyed in Kharkiv, killing at least four people and wounding 15 others, prosecutors office representative Serhii Bolvinov said on Facebook. He said 282 city residents, including six children, have been killed since the invasion began.

All Chernobyl nuclear plant facilities are without power and the diesel generators have fuel for 48 hours, Ukraine’s main grid operator said. The state communications agency said the power outage could put systems for cooling nuclear material at risk. The site has been under the control of Russian troops since last week.

The U.N. nuclear watchdog said it saw no critical impact on safety at Chernobyl because there could be “effective heat removal without need for electrical supply” from spent nuclear fuel at the site. The director general of the International Atomic Energy Agency, Rafael Grossi, tweeted that he would attend a meeting Thursday in Turkey between the foreign ministers of Russia and Ukraine in the hopes of making progress on the “urgent issue of ensuring the safety and security” of Ukraine’s nuclear facilities.

Ukraine’s energy minister said Ukrainian staff at the Zaporizhzhia nuclear plant, the largest in Europe, are physically and emotionally exhausted. He said about 500 Russian soldiers and 50 pieces of heavy equipment are inside the station, which the Russians seized last week.

WHAT ARE WESTERN COUNTRIES DOING TO HELP UKRAINE?

Western countries are sending arms and other aid to Ukraine and have ratcheted up sanctions on Russia in hopes of convincing Russian President Vladimir Putin to pull back.

The Pentagon on Wednesday slammed the door on a plan to provide MiG fighter jets to Ukraine, even through a second country, calling it a “high-risk” venture that would not significantly change the effectiveness of the Ukrainian Air Force. Poland had said it was prepared to hand over MiG-29 planes to NATO that could then be delivered to Ukraine, but Pentagon press secretary John Kirby said U.S. intelligence concluded that it could trigger a “significant” Russian reaction.

Cyprus said it sent its first 165-ton batch of humanitarian aid to Poland for distribution in Ukraine, including food, sleeping bags, tents, shoes and other items. And donations poured in to a collection center in Paris for the people of Ukraine, including baby food and other aid.

“They’re fighting for us, they are fighting for our freedom. We just have to stop Putin and we have to help them,” said donor Claude De Mol, 60, a German-Belgian woman who came to deliver medicine and gloves.

WHAT’S THE VIEW FROM INSIDE RUSSIA?

Russia has cracked down on independent reporting and blocked access to Russian-language news from multiple foreign news outlets. Scattered protests against the war continue in the country, but people in Russia are losing sources of information about what is happening.

While U.S. and British bans on Russian oi l have increased the pressure on Europe to follow suit, the continent’s dependence on Russia for energy makes an immediate embargo much more difficult.

Heineken, Universal Music and Discovery joined other large companies such as McDonald’s, Starbucks, Coca-Cola, PepsiCo and General Electric in suspending business in Russia.

Amazon said it is suspending shipments of goods sold on its website to customers in Russia and Belarus and barring new third-party sellers from those countries. It also said its cloud computing network, Amazon Web Services, would stop allowing new sign-ups from Russia and Belarus.