Ribbon cut on new Spottsville bridge, replacing one from 1930s-era

The bridge, scheduled to open at the end of this month, should provide a safer, wider path for people and farm equipment to neighboring cities.

“Travelers will have a brand-new bridge that meets modern design standards and will turn daily commutes into safer, more enjoyable rides,” Beshear said in a press release. “This is a heavily agricultural area, and the new bridge will make life easier for farmers who will have a more direct route to drive their equipment without stopping traffic in both directions when they pass through.”

The bridge, constructed north of the old bridge, features a 12-foot driving lane in each direction and two, 8-foot-wide emergency shoulders for stalled vehicles or first responders. Construction began in February 2020.

“The completion of the new, much wider and safer Spottsville Bridge is a great transportation improvement for Northeast Henderson County,” Sen. Robby Mills, of Henderson, said. “It has been my privilege to help keep this project in the road plan for the last six years. This bridge could help further open up Northeast Henderson and Western Daviess County to more industrial development in the future. Congrats to all those who built and managed this fine project.”

The Richard W. Owen Memorial Bridge, known locally as the U.S. 60 Green River “Spottsville” Bridge, was named after an early member of the Kentucky Highway Commission who was from Daviess County and was instrumental in a bridge-building boom across Kentucky that started in the early 1930s. The truss bridge opened in December 1931 as a tolled bridge and crossed over the Green River. It was estimated to carry 3,000 vehicles each day, according to a press release.

The new bridge’s royal blue color was chosen by residents from a list of colors as part of a social media voting contest hosted by Henderson County Judge/Executive Brad Schneider.

The remaining bridge work includes painting the upper portion of the truss and striping the bridge deck. The bridge will partially open while the final work to connect it to the new alignment is being completed. Crews will be on-site in September to remove the old bridge and the old portion of the roadway. 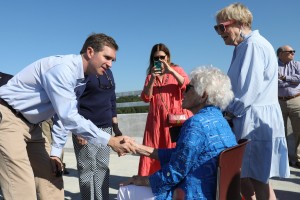 Helping cut the ribbon today was Irma Day, a Florida resident who participated in a ribbon cutting of the original bridge in the 1930s. She also cut the ribbon for a subsequent bridge opening after it was reconstructed.

The most popular Halloween candy in Kentucky? Reese's