The report says Baffert will sue if the track doesn’t lift the two-year ban he was given last May after Derby winner Medina Spirit failed a drug test. Because of the ban, Baffert cannot race in the Kentucky Derby or the Kentucky Oaks.

According to the report, Baffert wants his horses back on the track and is seeking millions of dollars in compensation and punitive damages.

Churchill Downs, Incorporated released a statement on social media saying, “CDI is committed to protecting the integrity and future of the racing industry – for the horses, our fans, our partners, our team members and the betting public.” The post went on to say, “No one is above the rules, including Mr. Baffert, and we remain intent on holding him accountable for his actions. 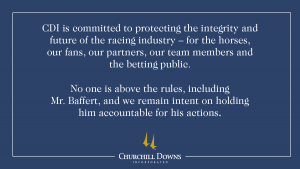 You can read the full report from the Times HERE.