Proposed legislation would require bouncers to get training

Law named for man killed in dispute with bar employee 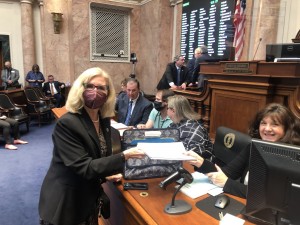 FRANKFORT, Ky. (WTVQ) – On the second anniversary of a constituent’s death after an altercation with a bouncer at Nowhere Bar in Louisville, state Rep. Lisa Willner filed legislation Wednesday designed to increase training and other safe-hiring standards for those hired to provide security at bars and nightclubs.

If enacted by the General Assembly, her bill would be called “Christopher’s Law,” in honor of Christopher McKinney.

“Christopher’s tragic death on Jan. 5, 2020, never should have occurred, and the events of that day highlighted the glaring gaps in state law when it comes to properly overseeing those who serve as bouncers,” said Willner of Louisville.  “I began working with his loved ones just a few months after he died to find the best way to close those gaps. Our legislation received bipartisan support last year from many of my fellow House members, and our hope is that the current legislative session is when Christopher’s Law becomes reality.”

Clark noted that there are currently no training requirements for those who serve as bouncers, and many bars and nightclubs hire by word of mouth or through social media.  “Those serving in the military or as law enforcement officers spend hours learning how to keep us safe, and the same should hold true for those hired to provide security in an alcohol-driven environment,” he said.  “They need to know how to de-escalate situations, specifically through interpersonal communication, and how to properly handle those who are a threat to others or themselves.”

Under Rep. Willner’s legislation, the Department of Alcoholic Beverage Control (ABC) would prepare a standardized bouncer application form, which would ask for prior experience – including incidents resulting in serious injury of a customer – and optional disclosure of the applicant’s criminal history.

All businesses hiring a bouncer would be required to use the form, and to file a report with ABC if a bouncer inflicts serious injury on a customer.  The bouncer would be removed from work for at least 14 days and would have to attend a bouncer-training program within six months of the incident.

The Department would develop criteria for those training programs, including a complementing curriculum for law enforcement officers so they better understand the differences between their full-time job and their off-duty work as a security officer.

ABC would also develop a bouncer-incident report log, to record incidents of bouncer misconduct resulting in serious injury to a customer.  Beyond its use to verify a bouncer’s record, the log would otherwise be confidential.

One other provision in her bill is that bouncers would not be allowed to consume alcohol or illegal substances while working.

Rep. Willner’s bill would not apply to those working as security guards hired at such venues as theaters, stadiums and arenas.  It will be considered during the 2022 legislative session, which began yesterday and will conclude by mid-April.

Festival on Fifth in Paris