Louisville's police chief says the victim, Omari Cryer, had a handgun and was wanted for assault, strangulation and other charges

LOUISVILLE, Ky. (AP) — A Louisville man who was fatally shot by a deputy U.S. Marshal during an arrest attempt was shot during a foot pursuit, Louisville’s police chief said Monday.

Omari Cryer, 25, was wanted on an arrest warrant for assault, strangulation and terroristic threatening when he was tracked to a residence in Louisville on Friday, Louisville Police Chief Erika Shields said at press conference.

“There was a brief foot pursuit. They ran upon a fence. Subsequently, the marshals opened fire striking Mr. Cryer,” Shields explained.

Shields added that Cryer was in the possession of a handgun at the time he was shot. She said that she anticipates any “body-worn camera footage to be released in the near future” after “essential” interviews are conducted.

The Jefferson County Coroner’s Office has described the cause and manner of death as “gunshot wounds/homicide.”

Antiya Parker, the mother of Cryer’s 2-year-old son, also attended the rally. She held a poster decorated with photos of Cryer and another with the words “Black Lives Matter.”

“We’re all confused,” she said. “You got these people who are saying one thing, you got some people saying another.”

Louisville police’s Public Integrity Unit is investigating the shooting at the request of the U.S. Marshals Service. 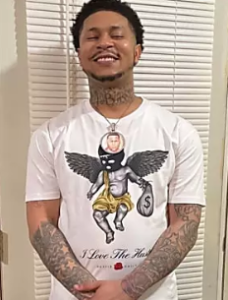 Louisville police said in a brief prepared statement there was an “officer-involved shooting” and Louisville officers were assisting at the scene.

A U.S. Marshals spokesman says federal agents were involved in a shooting in the morning.

Officials gave no information on the shooting victim.

The Louisville police Public Integrity Unit is investigating the shooting, according to an LMPD spokeswoman.