UPDATE (3/17/22) – The man Kentucky State Police says was in an officer-involved shooting in Bullitt County last week has been charged.

According to KSP, David J. Knopp, of Shepherdsville, has been charged with fleeing or evading police, assault on service animal, wanton endangerment and attempted murder of a police officer. KSP says the 23-year-old remains in the University of Louisville Hospital where he’s currently listed in stable condition.

LEBANON JUNCTION, Ky. (AP) — The Kentucky State Police are investigating the officer-involved shooting of a man accused of firing at officers and killing a police dog.

An agency statement says it began with a shoplifting complaint.

Officers were called Wednesday night to a Dollar General Store in Lebanon Junction when a male suspect fired at them and fled, a preliminary investigation found. A K-9 unit with the Shepherdsville Police Department located the suspect a short time later, and he shot a police dog sent to restrain him, the agency said.

Shepherdsville officers and Bullitt County deputies then fired at the suspect, striking him multiple times. He was hospitalized with life-threatening injuries. The K-9 died from gunshot wounds. 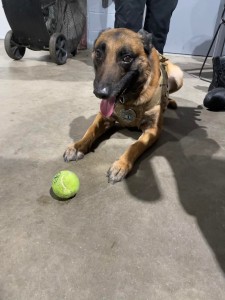 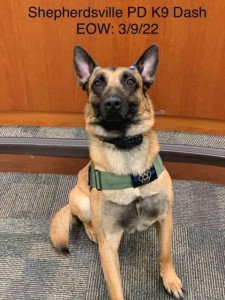