MOREHEAD, Ky. (WTVQ) – Orange peels and good police work led to the arrest of an accused burglar in Rowan County.

Sheriff’s Deputy Kris Cox investigated a burglary at a home on Friday, April 29, 2022.  The victim reported a firearm, gaming systems and interestingly, a bag of oranges had been stolen from his home, according to investigators.

Not far from the crime scene, Deputy Cox noticed an abandoned vehicle with orange peels on the ground next to it and a bag of oranges inside, according to investigators.

Deputy Cox had the vehicle impounded and she says she asked the tow company to notify her if anyone tried to pick up the vehicle or get any of its contents.

Two days later, the tow company notified Deputy Cox a woman was on her way to remove something from the impounded vehicle, according to investigators.

Deputy Cox, Deputy Will Thoroughman, Deputy Grant Riley and Deputy Riley Catron waited on the woman to show up at the tow company.

Investigators say 28-year old Brittany Dehart, of Morehead, showed up to get something out of the impounded vehicle.  Deputy Cox says she checked with dispatch and learned Dehart had active arrest warrants.

After searching the vehicle Dehart arrived in, deputies say they found the stolen firearm and other items reported stolen by the victim along with approximately 15 grams of methamphetamine, half a gram of heroin, scales, baggies used to package drugs and other drug paraphernalia.

Deputy Cox arrested Dehart and charged her with Burglary, Trafficking Methamphetamine, Trafficking Heroin and other related charges, according to investigators.

Dehart was taken to the Rowan County Detention Center. 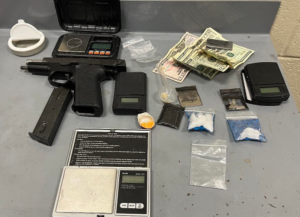 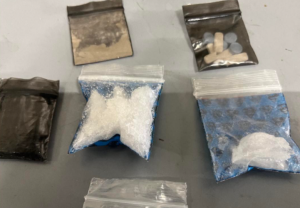