One arrested after shooting at house party near UK campus; 10 injured by shrapnel

ABC 36  spoke with students who say they were at the party. They described the commotion.

“That’s when they’re like ‘Someone got shot. We need to run.’ So we just ran down the street to this girl’s house and we had to stay there for a long time, until it was all cleared out and we could leave,” said student Riley Ellis.

“The whole circumstance, it shouldn’t have happened but that’s just the reality of life is stuff happens like that, and it’s just really scary that we live in an area like that,” said student Jacob Curry.

“Everyone on my floor of my dorm was screaming because one of the kids was from our dorm so it was a very big deal,” said student Ally Merenkov.

One shot was fired at the party that hit one person. Shrapnel bounced from the concrete and injured 10 others.

The party was hosted by Theta Chi in the basement of their house. Everyone injured are UK students, but the three suspects are not UK students.

Additional information will be released as it’s uncovered.

One person has been arrested in connection to the overnight shooting.

Lexington police have arrested 19-year-old Jason Almanza-Arroyo. He’s charged with 1st degree wanton endangerment, 2nd degree disorderly conduct, 3rd degree assault and alcohol intoxication in a public place. In addition, police say two other arrests were made that are unrelated to the shooting. Additional charges are pending for those arrests. 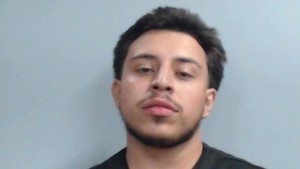 Almanza-Arroyo is lodged in the Fayette County Detention Center.

Police are investigating an overnight shooting that happened at a house party just off the University of Kentucky’s campus.

Lexington police say one student was shot and 10 were injured by shrapnel and debris around midnight following a house party Wednesday.

Three people total have been detained in connection to a fight at the party. UK police say two people showed up uninvited to the party, causing a fight to break out.

One shot was fired, hitting a female student in the leg. She was taken to UK Chandler Hospital with non-life-threatening injuries.

Shrapnel and debris injured 10 other students, but the injuries don’t appear to be from additional gunshots. All were taken to UK Chandler Hospital and both Lexington and UK police confirmed no injuries are believed to be life-threatening.

“None of these injuries have been reported as life-threatening right now. Lexington Police has three individuals in reference to this incident which we do believe is contained to a single basement in a residency on University Avenue,” said Lexington Police Lt. Brian Martin.

The two suspects arrested are not UK students.

This is a developing story. Stick with ABC 36 for updates

Paws 4 the Cause needs help searching for missing beagle