MONTICELLO, Ky. (WTVQ) – When Wayne County Sheriff’s Deputy Derek Dennis noticed someone in a car after hours in a gas station parking lot on KY 90, he decided to check it out.  It was just before 1:00 a.m. on Monday.

As Deputy Dennis approached the car he recognized a man inside as a person of interest in an ongoing drug investigation in the county.

Deputy Dennis says the driver, 24-year old Jonathan Meer, of Bronston, told him he had an outstanding warrant out of Pulaski County for non-payment of child support.  Deputy Dennis says when he searched the car, he found 62 grams of methamphetamine, which he says Meer admitted belonged to him and not his passenger.

Meer was arrested and charged with Trafficking in a Controlled Substance 1st Degree (greater than or equal to two grams of methamphetamine), according to investigators.  Meer was also charged in connection to the outstanding warrant out of Pulaski County.

Meer was taken to the Wayne County Detention Center.

Investigators say more arrests are expected in the case.

Deputy Dennis was assisted on the scene by Deputy Jerry Meadows and Deputy Allen Cash. 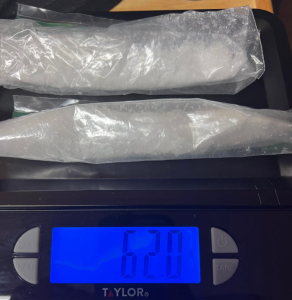