Magoffin County bus had 19 people on board during crash; injuries are of “varying degrees” 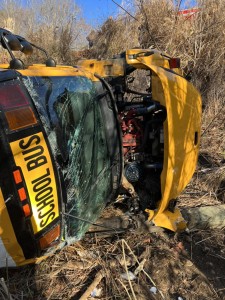 Magoffin County officials held a press conference at 1:30 p.m. to provide an update on the bus crash.

In the update, officials said students involved range in age from elementary to high school, and some made 911 calls for help after the crash. At this time, there are no updates on the condition of any student or bus driver but the majority of students were taken to ARH Paul B. Hall in Paintsville and Pikeville Medical Center.

The bus did not have seat belts.

Officials said the area of the crash was slated for the possibility of putting up a guardrail, and now they’ll be looking into that as there have been “several” wrecks along that stretch of road.

A local medical office will provide counseling services for students who must take a bus to school who may be scared or have PTSD.

Three students and the bus driver involved in the crash are critically injured and multiple other students are seriously injured, the judge-executive confirmed to ABC 36.

The remainder of the students involved in the crash have non-life-threatening injuries.

A press conference will be held at 1:30 p.m. at Magoffin County Fiscal Court, located at 56 E. Maple Street in Salyersville, by multiple agencies. ABC 36 will have a crew at the press conference to bring you the latest.

Eighteen students and one driver were on the bus at the time of the crash, according to Magoffin County Schools.

Those injured were all sent to hospitals, with “varying degrees of injuries.”

At this time, no fatalities have been reported.

“The district would like to thank everyone that extended a helping hand at the scene of the accident,” the school system wrote on Facebook. “Please keep all families in your thoughts and prayers.”

Multiple injuries have been reported after a bus crashed early Monday morning in Magoffin County.

According to the Magoffin County Sheriff’s Office, all officers are on scene, including Kentucky State Police, and multiple helicopters are en route to fly the injured out, one helicopter coming in as far as Ironton, Ohio.

The Magoffin County judge-executive says as of now, he cannot confirm the number of people injured in the crash, only that there were injuries.

Gov. Andy Beshear posted a statement on Twitter, asking the public to pray for everyone involved.

“Kentucky, we have some tough news. There has been a serious bus accident in Magoffin County involving children. @KyStatePolice is on the scene and we are responding swiftly. Please join me in praying for all those involved. We will continue to share updates as available. ^AB” he wrote in a tweet.

We’ve got a crew heading to the scene to learn more.

This is a developing story. Stick with ABC 36 for updates