Road trip not good for Colonels 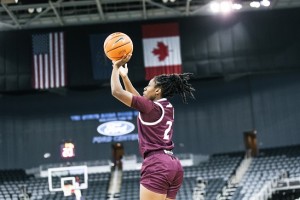 Evansville, 67-57, on Wednesday night at the Ford Center.

Evansville answered back and outscored the Colonels 20-10 to finish the half and took a 33-31 lead over EKU into the half at the Ford Center.

The Colonels cut the Evansville lead to four, 46-42, after an I’Liyah Green layup with 2:46 remaining in the third quarter.

Eastern Kentucky cut the Purple Aces lead to eight, 55-47, after a pair of free throws by Fox with 8:58 remaining in regulation but could never get any closer.

EKU forced 23 Evansville turnovers but committed 27 of their own.

The Colonels shot 30 percent from the field and 23% from three-point range while Evansville shot 45% overall.

The Colonels return home next Monday night when they take on Union College at McBrayer Arena. Tipoff is scheduled for 5 p.m.

Danville's Mason to be one of all-star classic basketball coaches