According to the Woody Williams Foundation, a nonprofit focused on the mission of honoring, recognizing, and serving Gold Star Families and the legacy of their loved ones who have paid the ultimate sacrifice, Williams passed away at 3:15 a.m. Wednesday, surrounded by his family at the VA Medical Center which bears his name. The medical center is located in Huntington, West Virginia.

Lexington Mayor Linda Gorton sharing condolences on social media saying in part, “I’m saddened to hear of the death of Hershel “Woody” Williams … the last living World War II Medal of Honor recipient. He served in the U.S. Marine Corps, fighting in the Battle of Iwo Jima, and has a U.S. Navy warship named in his honor.” Gorton went on to say, “Thanks to the support of the Woody Williams Foundation, Mr. Williams visited Lexington for the dedication of our Gold Star Families Memorial Monument in Veterans Park in 2017. Join me in keeping his family in our thoughts and prayers.”

Lt. Gov. Jacqueline Coleman shared condolences as well, saying in part, “Our country lost a hero in the passing of Woody Williams, America’s last World War II Medal of Honor recipient. In May, I was honored to attend the dedication of the Gold Star Families Memorial Monument in Northern Kentucky made possible by the @WWFoundation.” Coleman added, “Not only did Woody serve our country, he also made it a priority to honor and recognize the brave heroes and their families who provide us the freedoms we have as Americans. Woody’s legacy will live on – and thanks to his work, so will the legacy of so many others.”

Funeral arrangements have not yet been announced for the 98-year-old.

Williams was in the hospital in his home state of West Virginia, according to a post shared Monday by the foundation.

According to a post shared by the foundation, “Woody’s family would like to express their sincere gratitude for all of the love and support. They would also like to share that Woody’s wish is that people continue to carry on his mission.”

All correspondence and condolences may be sent to the Woody Williams Foundation via email at contact@woodywilliams.org or via mail at: 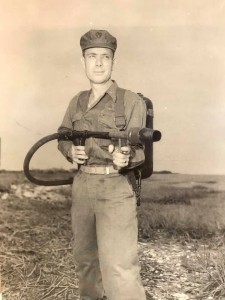