The initial call for the two lost people came in Monday night.  Wolfe County Search and Rescue called-in KSP to help with an aerial search, which began around 3:00 a.m. on Tuesday, according to rescue crews.

Because of fog, the aerial search was delayed until 9:00 a.m.

The missing people were located around 10:30 a.m. in a drainage area about six miles upstream from where the two planned to end their canoe trip, according to rescue crews.

Rescue crews had to push through heavy vegetation, scale cliffs and waterfalls to get to the people, who endured a night in below-freezing temperatures.  The two say they survived the cold by removing their wet clothes and built a shelter from leaves, taking refuge along a cliff-line. 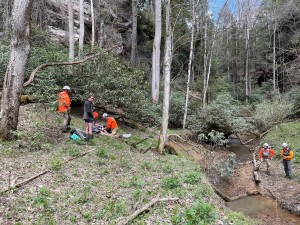