Alora Mazarakis, a 2014 graduate of Martha Layne Collins High School, said she remembered telling her father she wanted to go to college at NASA when she was young. In high school, she even joined Project Lead the Way, which is designed to allow students to experience what it would be like to be an engineer.

She enrolled in the University of Louisville’s Speed School of Engineering after graduation and has been working in various capacities at NASA since she was a junior, including as a contractor working on the International Space Station for five years. 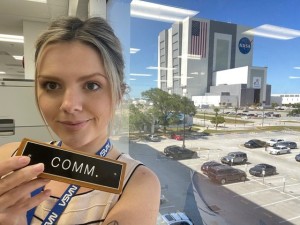 Alora Mazarakis, a graduate of Martha Layne Collins High School in Shelby County, is now an electronics engineer for NASA. She is part of the NASA team that helped launch the Artemis I mission this month. Her role is making sure the communication systems in the Orion spacecraft and the Space Launch System rocket work properly | Photo courtesy of Alora Mazarakis

Her role in sending a NASA rocket to space is to make sure the communication systems in the Orion spacecraft and the Space Launch System rocket work properly. The unmanned rocket will fly around the moon over the course of several days, until it’s expected to land back on Earth in the Pacific Ocean on Dec. 11, according to a press release. The rocket was sent off on Nov. 16.

“I’m just speechless because it’s so exciting to think that we’re going back to the moon,” Mazarakis said. “And this time, we’re not just going for political reasons, we’re not going to show other countries just that we can, we’re going for science.”

The two trips are slated for 2024 and 2025, and Mazarakis plans to be there each step of the way.