How to navigate the formula shortage, Kentucky Children’s Hospital weighs in

LEXINGTON, Ky. (WTVQ) – Parents have been struggling through formula shortages since the Abbott recall a few weeks ago, which doctors say took many Similac, Alimentum and EleCare products off the shelves. So what can parents do?

Experts at Kentucky Children’s Hospital in Lexington say if you’re struggling to find formula, don’t “water down” what you have since babies need a certain calorie count. They also warn against giving babies almond milk or other low-protein milk options that won’t have all the nutrients needed, or giving cow’s milk without talking with a pediatrician first.

“If you have a child who is on standard formula, you have many 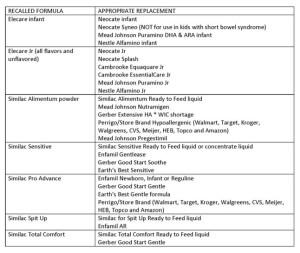 more options,” says Therese Ryzowicz, clinical nutritionist at the Kentucky Children’s Hospital. “We deal with primarily the children who have very specific needs and they can only have one formula or one class of formula, those children are impacted the most.”

Ryzowicz says if your baby has special dietary needs, talk with your child’s pediatrician for alternatives to the formula unavailable. She says luckily, programs like WIC were able to quickly adapt and switch to different generic brands for parents.

“It’s hard for parents right now, it really is,” says Ryzowicz. “I feel for a lot of them, especially with special care needs.”

One family struggling through the formula shortage is the Rankins family. Savella Rankins has a daughter who is just one year old and has short bowel syndrome, so she can only use specific kinds of formula.

“I’ve already switched her formula three times,” says Rankins. “Switching formulas for her is like really bad for her gut.”

Rankins says she’s down to 2 cans of Puramino formula and after those are gone, she’ll have to switch her daughter a fourth time to Neocate Syneo.

“It’s just really worrying that my daughter could probably be hungry or be re-admitted to the hospital to be put on TPN and lipids, just for her to gain weight,” says Rankins.

Not only are store shelves bare, non-profits like ‘The Nest’, a Lexington-based support organization for women, children and families, is feeling the impacts of the formula shortage, too. The Nest says it’s usually able to help parents get the supplies they need, but with the formula shortage fewer people have been able to donate, so its supply surplus is gone.

“We’re seeing way more asks than we are gives,” says Adam Kuhn, family assistant supervisor at The Nest. “When a place like WIC has us on their list, we are getting just call after call for this kind of thing.”

The Nest says its current supply will only last a couple of days but it’s trying to work with families to fulfill other needs as a way to improvise a solution for the formula shortage.

“We also want to help them try to afford formula they may not have been able to otherwise,” says Kuhn. “If we can get them diapers or some other material to help them save money on that, then maybe they can actually get that formula that they need in a bigger amount.”