The written reprimand was for "unprofessional conduct"

HAZARD, Ky. (WTVQ) – The principal at Hazard High School and two staffers received written reprimands by the school district after a controversial homecoming event at the school last month with scantily-clad male students simulating lap dances on school officials and female students pretending to serve beer while wearing shorts and t-shirts with ‘Hooters’ written on the front.

Under Kentucky’s Open Records Act, the Lexington Herald-Leader received a copy of the reprimands for unprofessional conduct for Principal Donald “Happy” Mobelini, who is also the Mayor of Hazard, and staff members Larry Thacker and Joshua Hurt.

The newspaper reports all three reprimands were identical, saying on Oct. 26, Mobelini, Thacker and Hurt exhibited “poor professional judgment in that you allowed a student led skit to reach an inappropriate level.”  “This action placed the school district in a situation of legal liability and cast it in a poor light,” according to the letter cited by the newspaper.

The school and the school district received negative national attention in the wake of the event.  Gov. Andy Beshear called the event “inappropriate.”  State officials are investigating the incident.

The newspaper report says the three men will have to attend training approved by the school district at their own expense and that similar incidents could result in more disciplinary action, including termination.

The report says Mobelini hasn’t responded to several requests for comment and Thacker and Hurt declined to comment through a school district employee.

The images of a series of skits done by students to celebrate homecoming went viral, leading to a school district investigation and a lot of debate.

Gov. Beshear said the event was inappropriate and told Kentuckians there is a plan to address it.

Gov. Beshear also said students likely won’t be punished, and this could be a learning moment for them – to show the effect their choices have, and also show them what is and isn’t acceptable.

HAZARD, Ky. (WTVQ) – An investigation by the Hazard Independent Schools superintendent is underway after photos went viral on social media of a homecoming tradition known as the “Man Pageant.” Some say it’s a fun, harmless tradition, while others call it inappropriate, offensive and say it should be banned.

Pictures were posted of male students dressed in women’s lingerie while twerking and doing lap dance moves on school officials, including the principal who is also the Hazard mayor, and female students who wore shirts saying ‘Hooters’ and carried drinks made to look like beer. The images were taken during a series of skits done by students to celebrate homecoming. The pictures went viral leading to a school district investigation and a lot of debate.

Late in the evening on October 26, 2021, I was I was made aware of concerns raised by photographs that were posted on the Hazard High School Athletic page. The first thing I did on October 27th, was initiate an investigation into the incident. I found photos of inappropriate student- led activities that had since surfaced on social media. The district has the responsibility to address these issues that arise out of school-based activities.   As a district, we are doing exactly that.

First, I wish to address some questions around the incident.  The activities were part of Homecoming festivities and were driven by the students.  We strive to foster creativity in our students, but unfortunately, this time it was carried too far.  Spirit Week at Hazard High School has a long and celebrated tradition. Homecoming activities were planned as a celebration for students, staff, and the school community. All were intended to be fun and good-natured however, the activities did not play out as intended. While Homecoming is an annual tradition, there has never been any issue raised prior to this year.  Now that an issue has arisen, we are taking this opportunity to review policy and procedures to make certain that it does not happen again.

1.Appropriate disciplinary action has been taken following the investigation. As it is a personnel matter, we are not allowed to disclose any further information regarding the specifics of the discipline.

3.Also, training will take place on policies and procedures with all district staff and SBDM’s to ensure this doesn’t happen again. Using this as a teachable moment, we will provide social media training for our students and staff. In today’s society students must understand that anything posted online is permanent! It is there on public display for everyone to see and share around the globe.  We would hate to see a single youthful indiscretion haunt one of our children for their entire life. We have a dress code that is to be followed at all times.  It is apparent that it was not in this case, but we will assure you that it will be enforced in the future at all school activities, for both males and females.  Costumes will be reviewed for appropriateness in additional to being required to meet the dress code.  Any costume referencing drug or alcohol use will be strictly prohibited.

At the end of the day, the light-hearted activity simply got out of hand, and for that, we apologize.  In the future, we will strive to keep the lighthearted, fun nature of school activities without the inappropriate behavior.  We will continue to seek to involve our students and foster their creativity, but with more direction.  They are young and we will be there to offer better guidance for their ideas in the future.  We love our students and only want to provide them with the best education and foundation for a successful life.  We only ask that not judge a district with a century long tradition of striving for excellence on a single incident where fun trumped judgment.

Our district would like to apologize for the activity that has been portrayed in the media and we regret how this has unfolded. This is not the type of event that typically occurs here at Hazard High School, and we sincerely regret any embarrassment this has caused our school community. We love our Hazard High School students, staff, and community at large.

Many people took to Facebook commenting homecoming activities like this have been tradition since the 90’s and have not been an issue before, but others argue that regardless of tradition, the behavior is unacceptable.

“It’s all in fun and it’s just celebrating homecoming and it’s just, it’s not meant to ever be this big deal that it’s been made into,” says Hazard High School alumnae Lisa Collett James. “I truly believe in my heart that nobody intentionally was offending anybody.”

“As someone who lives in Hazard and a parent, I don’t understand how anyone could think, you know, that that is okay,” says Charlene Crase, Hazard resident. “All those kids seeing that and watching that and thinking that’s okay, it’s not. They don’t need to feel like they should do stuff like that.”

The Kentucky Department of Education released a statement on Twitter saying it is aware of the incident and has been in contact with the superintendent.

“Under state law, superintendents have a duty to report any instances of educator misconduct to the Education Professional Standards Board (EPSB),” the tweet went on. “If an investigation finds a certified educator likely violated the Kentucky Educator Code of Ethics, they are required to report this to EPSB. Here is a link to the Code of Ethics, as defined by: 16 KAR 1:020.”

According to the DOE, if any citizen of Commonwealth feels the state’s educator Code of Ethics was violated by a certified educator, they can also file a written complaint with the EPSB by email to epsbeducatorethics@education.ky.gov.

HAZARD, Ky. (WTVQ) – From lap dances to ‘waitresses’ carrying pints of ‘beer,’ a Homecoming event Tuesday in the gym at Hazard High School is getting reactions — pro 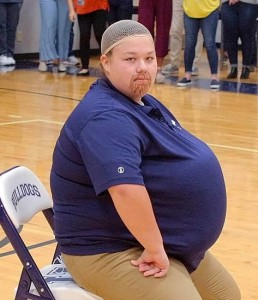 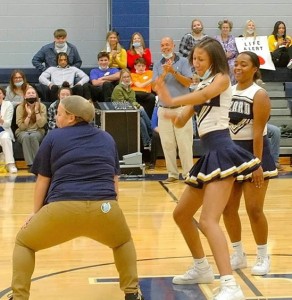 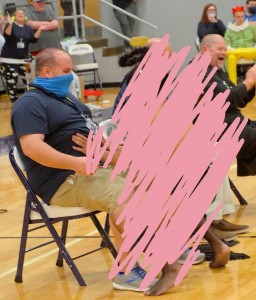 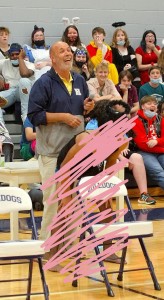 Student participants have been marked out in these pictures that were shared on social media by others.

and con — from across the state and beyond for student and teacher behavior.

Pictures posted by the school’s athletic department on its Facebook page have since been taken down but not before many were captured or downloaded and shared. The pictures showed male students dressed as women giving their version of stripper lap dances and rubbing suggestively on male staffers. 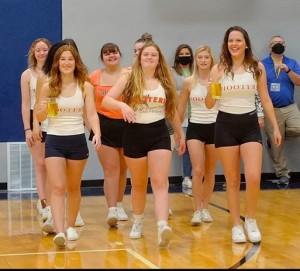 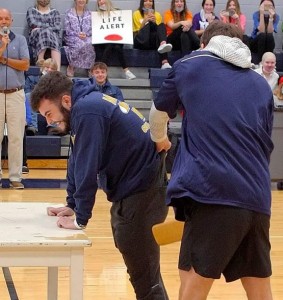 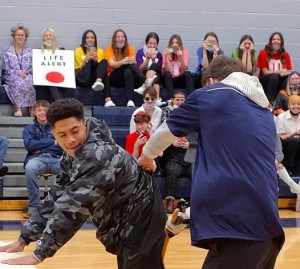 The pictures also showed people being paddled, students pretending to be pregnant and a variety of other activities.

On social media, most comments have ranged from mild concern to outrage at the behavior and the way women, gays and others were depicted. But a few said the kids should be allowed to enjoy the ‘fun’ and ‘humor.’

School officials have not returned a number of messages and e-mails for comment or explanation.

Interestingly, Donald “Happy” Mobelini is both the school’s principal and Mayor of Hazard. The mayor’s office said he was “unavailable.”