UPDATE: Missing man in Lawrenceburg has been found

UPDATE (3/22/22) – A golden alert for a missing man has been canceled. According to the Lawrenceburg Police Department, “Larry Williams has been located and is well.”

No further details were given.

LAWRENCEBURG, Ky. (WTVQ) – The Lawrenceburg Police Department has issued a golden alert for a man last seen almost a week ago.

According to Lawrenceburg police, Larry Williams was last seen leaving his home on West Broadway Street on March 15. Police say Williams has a history of depression and may be without much-needed cardiac medication.

Police say Williams may be driving a blue 2010 Ford Escape SUV with Kentucky license plate: 894PFS. Williams is described as a white male about 6’0″ weighing around 200 pounds. He has hazel eyes and usually wears a baseball cap and glasses.

If you have any information on the whereabouts of Williams, you’re asked to call 911 or the Lawrenceburg Police Department’s non-emergency line at 502-839-5125. 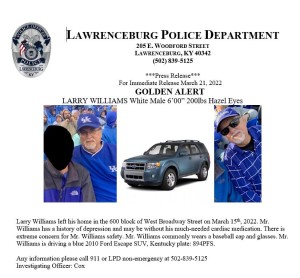