GPD has responded to several incidents

GEORGETOWN, Ky. (WTVQ) – The Georgetown Police Department shared a warning on Monday about a social media trend called the Orbeez Challenge. According to the department, it’s a dangeorus trend that encourages shooting strangers with Orbeez water beads.

Georgetown police say in some cases, the beads are frozen or modified, making them more harmful.

According to the post shared by Georgetown police, “The beads are shot with airsoft guns, some of which resemble real firearms! These beads can cause serious injury & property damage!”

The post went on to say, “Recently, we’ve responded to several incidents where these types of air guns were used to shoot people. Criminal charges can stem from shooting someone or causing property damage using these air guns.”

Georgetown police encourage parents to discuss the dangers of this type of activity with their children. 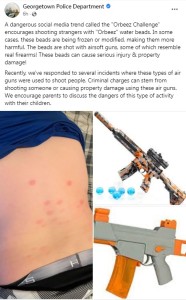