Henry to serve as panelist during final night of competition

LEXINGTON, Ky. (WTVQ) – The Miss America Organization (MAO) announced former Miss America Heather French Henry of Kentucky will serve as a panelist during the upcoming 100th anniversary of the Miss America competition on Thursday, Dec. 16 at the Mohegan Sun Arena in Uncasville, Connecticut.

According to MAO, fifty outstanding women are competing for the job of Miss America 2022 and over $435,500 in scholarships, including a record $100,000 scholarship for the winner. Haley Wheeler will represent Kentucky in the competition.

On Thursday night, only one woman will be crowned by reigning Miss America, Camille Schrier, and will walk away with a six-figure salary and $100,000 in scholarship assistance, according to MAO.

“As we planned our 100th Miss America Anniversary competition, we felt who better to honor and celebrate the heritage of this iconic institution than the amazing women who have actually held the title,” said Shantel Krebs, Miss America Organization Board Chair and Interim President and CEO. “We are excited to have our Forever Miss Americas join us as co-hosts and panelists as they truly understand the hard work and commitment that each of these incredible young women have put in over the past year as they prepare for our final night of competition and the official title of Miss America 2022.”

Even though Wheeler has been busy competing for Miss America this week, she’s remained dedicated to the state organizing collections of items needed for seniors affected by the tornadoes in western Kentucky. Wheeler shared a wish list HERE. 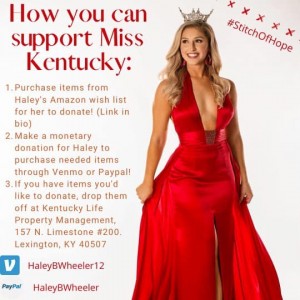 Heather is a nationally renowned advocate for military veterans and a professional media specialist. During her year as Miss America 2000, she worked with the Whitehouse and members of Congress and Senate to create landmark legislation to provide more funding and healthcare for homeless veterans and women veterans. For over 20 years, Heather has continued her work for veterans. She is the only woman to have served as the Commissioner of the Department of Veterans Affairs for the Commonwealth of Kentucky, serving under two Governors. She and her husband, former Lt. Governor Dr. Stephen Henry, founded the Rosemary Clooney Museum in partnership with Paramount Studios which houses the beloved White Christmas Movie Costume Collection. She is now working to curate and preserve the 100th Anniversary Miss America Collection. Professionally, Heather is the Vice President of Media Training for the Brielle Cotterman Group, specializing in media strategy for women entrepreneurs.

You can read more about the Miss America Organization HERE. The competition will air at 8 p.m. ET.

You can find more information on Miss Kentucky HERE.