EKU leads early but falls at No. 15 USC 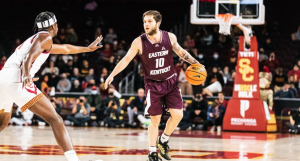 The Colonels will be back in McBrayer Arena on Saturday to host Marshall.  Tip-off is scheduled for 7 p.m.

Curt Lewis connected on a three-pointer from the right wing to put EKU in front 6-5.  However, the Colonels went on a scoring drought that lasted 5:21 as the Trojans scored 12 unanswered.  Eastern Kentucky started 2-for-16 from the field.

Isaiah Mobley’s two free throws with 13:04 left in the first half capped the run and put USC ahead 17-6.  Russhard Cruickshank’s jumper with 10:31 on the clock ended the Colonel drought.

After falling behind by 15, 30-15, on a three-pointer from Mobley, EKU (5-5) scored six straight to get back within nine.  Cruickshank’s jumper with 3:58 left in the first stanza cut the deficit to 30-21.  The Trojans responded by scoring the next seven points and led by double figures the rest of the way.

Late in the game, USC took a 23-point lead, 74-51, but the Colonels didn’t fold.  Eastern Kentucky went on an 11-0 run, including three straight three-pointers from Cooper Robb, Braxton Beverly and Jannson Williams, to get within 12.

Southern California (9-0) came into the game having made an average of 5.8 three-pointers per game this season.  Mobley made five by himself and the Trojans finished with nine as a team.

The Colonels forced 18 turnovers and turned it over just seven times, but shot 32 percent from the field (23-of-71) and 26 percent (10-for-39) from behind the three-point arc.  EKU made all 12 of its free throw attempts.