BENTON, Ky. (WTVQ) – Startling revelations were released Friday in the ongoing investigation into the shooting death of a Calloway County Chief Deputy by a suspect outside the Marshall County Sheriff’s Office last month.

According to the preliminary investigation by the Kentucky State Police Critical Incident Response Team, which investigates officer-involved shootings statewide, the Marshall County Special Response Team, which is made up of multiple agencies, arrested 30-year old Gary Rowland in Benton on outstanding warrants, including for absconding from parole and other drug and gun-related crimes.

KSP says during the interview, Rowland asked if he could smoke a cigarette.  Both Deputy Bowman and Chief Deputy Cash took Rowland outside in front of the sheriff’s office where Rowland pulled out a gun and shot Chief Deputy Cash, according to the investigation.

Investigators did not address where Rowland concealed the gun or how it went undetected during his arrest.

KSP says both Deputy Bowman and Deputy Little were placed on administrative leave following the incident. Deputy Bowman is a 27-year law enforcement veteran and has served with the Marshall County Sheriff’s Office since 2019. Deputy Little is a four-year law enforcement veteran, having served all four years with the Marshall County Sheriff’s office.

Chief Deputy Jody Cash was a 22-year law enforcement veteran and had served with the Calloway County Sheriff’s Office since 2020. During his career, he served eight years with the Kentucky State Police retiring in 2018 at the rank of Sergeant, six years at the Murray State University Police Department, achieving the rank of Assistant Chief, and six years at the Caldwell County Sheriff’s Office.

KSP has statewide jurisdiction and investigates officer-involved shootings throughout the commonwealth as requested by local, state, and federal law enforcement agencies. KSP is committed to being transparent while ensuring the integrity of the investigation. To protect the integrity of an ongoing investigation, it is KSP’s standard operating procedure not to release specific details until vital witnesses have been interviewed and pertinent facts gathered. Timelines to complete investigations vary based on the complexity of the case. 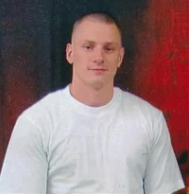 MURRAY, Ky. (WTVQ) – The funeral procession route for slain Calloway County Sheriff’s Chief Deputy Jody Cash will originate Saturday, May 21 at the CFSB Center in Murray, according to the state.

Chief Deputy Cash, who was a retired Sergeant from Kentucky State Police, died after being shot by a suspect in the line of duty in front of the Marshall County Sheriff’s Office on May 16.  The suspect was also shot and died from his injuries.  The incident is under investigation by the Kentucky State Police Critical Incident Response Team (CIRT). 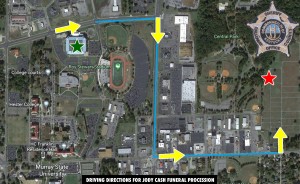 CALLOWAY COUNTY, Ky. (WTVQ) – Funeral arrangements have been announced for a Calloway County Sheriff’s deputy shot and killed in the line of duty.

According to Imes Funeral Home & Crematory in Murray, the funeral service honoring the life of Chief Deputy Jody Cash is set for 1 P.M. on Saturday, May 21, 2022 at the CFSB Center on the campus of Murray State University, 1401 KY-121, Murray, KY 42071. Joey Adair will officiate and entombment with honors will follow at Murray City Cemetery.

Tribitues and memories may be shared on the funeral home’s website HERE.

Deputy Cash and the suspect were pronounced dead at an area hospital.  No other details were released surrounding the officer-involved shooting.

“Britainy and I ask Kentuckians to join us in holding the family and loved ones of the Calloway County Deputy in their prayers,” said Gov. Andy Beshear. “This deputy has paid the ultimate sacrifice today while serving our commonwealth. Let us honor the life, bravery and service of this deputy.” 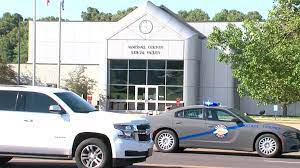 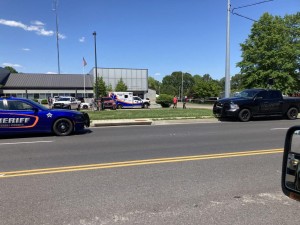