SCOTT COUNTY, Ky. (WTVQ) – A utility pole that broke at its base left hundreds of people without power Thursday night in Scott County, according to Owen Electric Cooperative.

The company’s online outage map says 739 customers were without power.  The company says it hopes to have the power restored by 2:30 a.m. Friday.

The utility company says it doesn’t know why the pole broke, but its location and soft ground from rain made it a challenge for repair crews to get to the area.

The company says the broken pole was about 150-yards off Long Lick Pike.  The company says it’s a three-phase pole which includes telephone wire, which means a lengthy repair.  The pole and wires have to safely be taken down, remove the attachments, build the replacement, reattach and re-energize.

The company says because of the soft ground and the weight of the repair trucks, chains had to be put on the tires so trucks could get to the damaged pole. 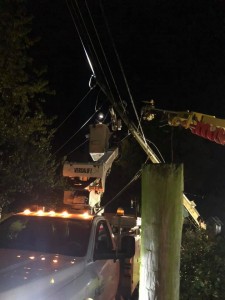 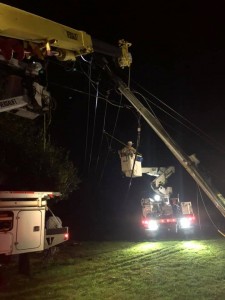