UPDATE: (1/9/2022) (WTVQ) – Kenneth Strange, the suspect in the murder of 39-year-old Lydia Cassady in Nicholasville last week…who has been on the run since… is dead, killing himself as police in Florida tried to approach him.

Sunday, officers with the Lake Wales Florida Police Department were working with detectives with Nicholasville police and agents with the U.S Marshal’s task force to try and apprehend Strange.

Lake Wales officers found him at a gas station in Lake Wales.

According to Nicholasville Police, as those officers approached him, Strange pulled out a gun and took his own life.

Shirley Sheomaker who was reported to have been with Strange was found in the car and is doing okay, and is speaking with the police.

We will keep you updated on this story as more information is released.

UPDATE: (1/8/2022) (WTVQ) -The Jessamine County Coroner has identified the woman who was shot and killed in Nicholasville Wednesday by suspect Kenneth Strange…who is still on the run 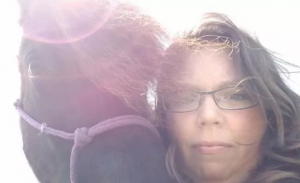 The coroner has identified the victim as 39-year-old Lydia Cassady….Strange’s longtime girlfriend.

According to her obituary Cassady was a CCMA for the Lexington Clinic. She loved animals, cooking, baking, art and being outdoors.

Her obituary says she loved horses and previously worked with the Kentucky Equine Adoption Center.

Her visitation will be held Friday January 14th at 4 p.m. at the Tucker, Yocum and Wilson funeral home…with her funeral held Saturday the 15th at 11 a.m., also at the funeral home.

A GoFund Me has been created to help with funeral expenses…you can find a link here.

—-
UPDATE (1/5/22) – Police in Nicholasville have new information in the search for a man wanted in connection to a murder.
According to the Nicholasville Police Department, Kenneth Strange may be in a black 2019 Jeep Renegade with Kentucky plates AMD-912 and may be in the company of Shirley Shewmaker. Police said they’re concerned for the safety of Shewmaker.
If anyone has seen this vehicle or knows their whereabouts, call the Nicholasville Police Department at 859-887-5447 or your nearest law enforcement agency. Strange is considered armed and dangerous. He also has outstanding warrants for his arrest for murder and tampering with physical evidence.
NICHOLASVILLE, Ky. (WTVQ) – Police in Nicholasville continue to search for a man in connection to a murder investigation.
According to Nicholasville police, officers responded to 100 Lauren Drive early Wednesday morning in reference to a possible death investigation. Police say a family member told officers that a female was found dead in the residence. After an investigation, police say it was determined the victim had been shot and an arrest warrant was issued for Kenneth Strange.
Strange, who lives at the residence, is charged with murder and tampering with physical evidence. According to police, Strange should be considered armed and dangerous. If you have any information on his whereabouts, contact Nicholasville police or your local law enforcement agency.
The victim has not yet been identified.
Categories: Featured, Local News, News
Tags: kenneth strange, Nicholasville Police Department