LEXINGTON, Ky. (WTVQ) – A man facing arson charges will now be brought before a grand jury.

Tyler Jordan’s case in Fayette County District Court was waived to the grand jury on Tuesday, Oct. 12, according to the court clerk.

ANDERSON COUNTY, Ky. (WTVQ) – A 27-year-old man already charged with arson, wanton endangerment and other offenses in connection with an apartment fire Sept. 3 has been arrested on drug charges after his mother called police on him.

Tyler Jordan was arrested Sept. 19 at his mother’s home in Lawrenceburg. His mother had bailed him out of the Fayette County Detention Center following his arrest on the apartment fire charges.

In the fire at Pinegrove Apartments on Tates Creek Road, five people had to jump from a second floor balcony to escape the blaze. Two suffered broken legs.

The new charges include first-offense possession of methamphetamine, according to an arrest citation filed by Kentucky State Police who responded to the Sunday night call along with Lawrenceburg Police and Anderson County Sheriff’s Department.

In the latest call, his mother reported a disturbance to law enforcement and when officers arrived, she told them her son was “under the influence of methamphetamine,” according to the arrest citation. She told officers the drugs were in his room where he’d been living since she posted his bond in Fayette County.

The citation says she showed officers her son’s room and they found drugs in his dresser.

He remains in the Shelby County Detention Center on $5,000 bond.

LEXINGTON, Ky. (WTVQ) – A suspect has been arrested in connection to the fire at the Pinebrook apartment complex.

Police have charged 27-year-old Tyler Austin Jordan who lived in Unit 85 — the bottom right apartment in the four-unit structure that burned — with first-degree arson, five counts of first-degree wanton endangerment, resisting arrest and interfering with fire operations in connection with the fire and forced five people to jump from a second flood balcony to escape the fire at Pinewood Apartments at 3650 Tates Creek Road.

According to the Lexington Fire Department, the fire has been determined to be incendiary in nature, meaning it was intentionally set. Investigators say they know the origin and cause of the fire but aren’t ready to release it.

Jordan was arrested at the scene of the first at about 2:50 a.m. Friday and charged with resisting and interfering with fire operations. A relative from Lawrenceburg posted a $1,500 cash bond for him Monday night and the additional arson and endangerment charges were filed Tuesday morning, according to the arrest citations.

His arraignment in Fayette County District Court was continued until later this month.but not ready to release yet.

According to the citations, the fire started above his apartment with “multiple points of origin and indications of ignitable liquids.”

The resident of the apartment of above Jordan’s was away for the night. Her pet dog died in the blaze.

The five people — a man and his girlfriend, his 17-year-old daughter, his aunt and a friend of the aunt who were in town for a dog show — tried to escape through their apartment door from the unit on the top left but were met by a “wall of fire.”

They went to the balcony as their only escape route. The man helped lower some down or they jumped with people on the ground, including neighbor Chelsea Hamblin, helping them on the ground.

The five residents were able to get three dogs out with them and then firefighters found two more after the flames were extinguished. Miraculously, the two survived somehow.

LEXINGTON, Ky. (WTVQ) – Dogs visiting for a dog show this weekend may have saved some lives when a fire erupted in the Pinebrook apartment complex on Tates Creek Road early Friday morning.

And the man who tried to lead his family out of the apartment where they were staying said he was “greeted by a wall of fire” when he opened the door to escape.

Not ready to fully talk on camera, ‘Rich’ said he, his girlfriend, his 17-year-old daughter, his aunt and his aunt’s friend, along with their five dogs, were alerted to the fire when the dogs began barking, awaking the 17-year-old. She got everyone else up but the group had its escape blocked by the flames.

“We wondered how it spread so fast,” ‘Rich’ said.

They made it to the porch of the second-floor apartment where neighbors had begun to gather to try to assist.

‘Rich” and the others threw three of the dogs out and ‘Rich’ lowered his daughter and his aunt as far as he could before he had to drop them The two women ended up with broken legs and both underwent surgery Friday morning, he said.

‘Rich’, his girlfriend and the aunt’s friend all jumped and were helped by the bystanders below, he said.

He and his girlfriend spent much of Friday morning on the friend with insurance agents, friends and family.

“If it had just been the two of us and the others weren’t there, we’d have been in the bedroom, no telling what would have happened,” ‘Rich’ told a friend, recounting the harrowing experience.

While they were able to get three of the dogs out with them initially, they feared the other two would not survive. But after the flames were extinguished, firefighters found them and returned them to the aunt’s friend, sparking a joyous reunion on the scene and via telephone with those at the hospital.

The said they think the fire started in the lower right apartment and spread to the unit above it plus the two on the left side of the stairwell that separates the units where ‘Rich’ lived with his girlfriend.

The tenant in the top right apartment was not at home and returned to the unit Friday morning. She lost her pet dog in the fire.

A firefighter was injured and was treated and released following the blaze.

LEXINGTON, Ky. (WTVQ) – At least three people are injured, including a firefighter, after an early-morning fire in Lexington.

One of the three, a woman who had to jump from a balcony, has potentially life-threatening injuries, according to firefighters. Another individual remains in serious condition. 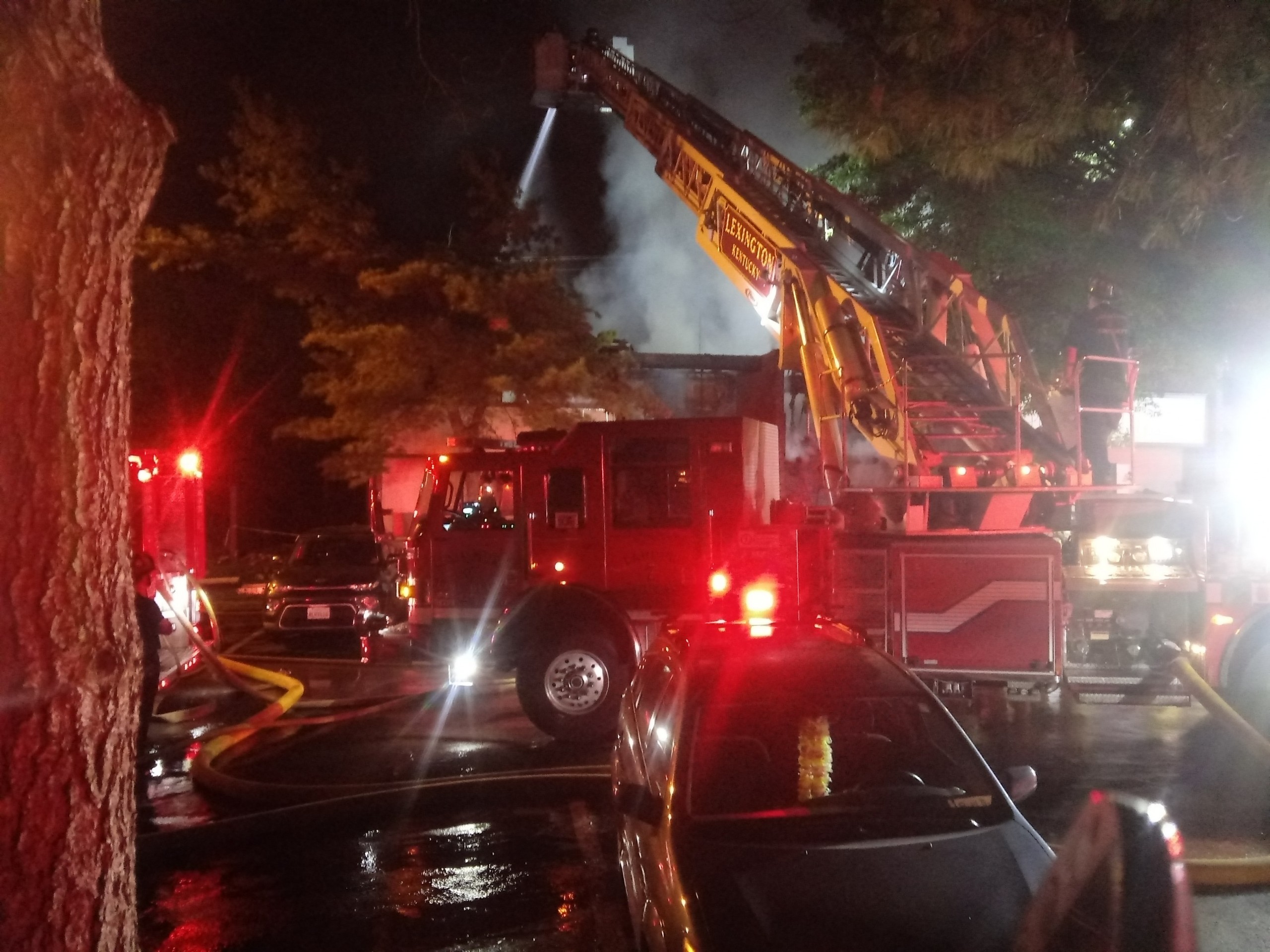 Nearby resident Vickie Cox describes the scene, “We were watching TV and all of a sudden we heard a lot of screaming and carrying on outside. When we got out here, we could see the building next to us was completely engulfed, shooting through the roof.”

Resident Chelsea Hamblin and her roommate were coming from the laundry room when they saw the flames and rushed to help, encouraging as many as six people to jump from a second-floor balcony to escape. Their exit to the center stairwell was blocked by flames, leaving the jump as the only exit.

At least four apartments in the complex are damaged or destroyed, according to police.

Saas said the people in the units that caught fire were able to get out, except for two women from one of the units on the second floor. To escape the fire, they jumped from their balcony, both hurting their legs and one breaking her ankle in the process.

Saas said a firefighter was treated for burns and released.

The units are in a four-plex design with two on each side of a stairwell, one on top of the other. The fire was in building D with the heaviest flames in the two apartments on the right as you faced the fur, Hamblin described.

According to Saas, the fire has been put out but four units were completely destroyed, displacing the residents. Saas said the complex has relocated those residents for the night. The cause and origin of the fire are currently unknown.

Police say three dogs were rescued and given oxygen and are doing well. Two of the dogs 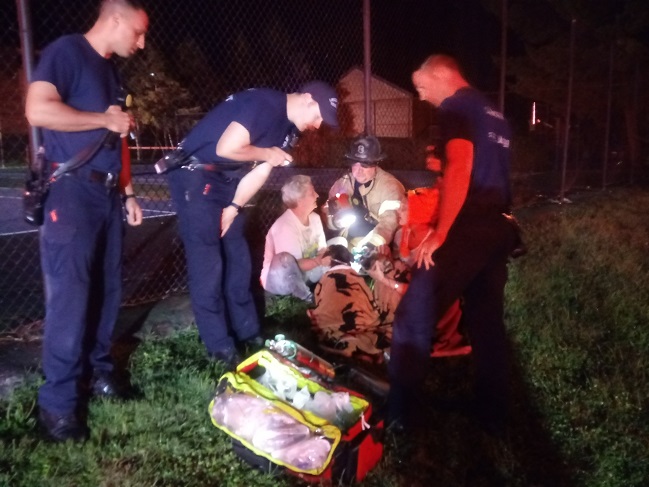 were rescued after the flames were extinguished from the apartment from which the people jumped. The two dogs were reunited with their joyful owner.