Pickup, SUV collide head on at the Scott County line

According to Fayette County Coroner Gary Ginn, David James Fish died from severe trauma as a result of the collision on Leestown Road at the Fayette-Scott County line.

Fish was northbound when his SUV crossed the center line crashed into a Ford F-250 pickup which was towing a trailer with gas line equipment.

FAYETTE/SCOTT COUNTY LINE/ Ky. (WTVQ) – First responders now say only two vehicles were involved in a fatal accident that happened at about 9 a.m. on Leestown Road — Highway 421 — at the Fayette-Scott County line.

According to Fayette County Coroner Gary Ginn, a man was killed in the head-on crash. He was the only person in an SUV. A lone man was in the other vehicle, a pickup, Ginn said.

The truck was inbound on Leestown Road and the SUV was outbound when the SUV crossed the center line. The pickup driver tried to avoid the oncoming SUV but couldn’t and the vehicles hit head on. The pickup ended up off the inbound side of the road and the SUV off the outbound shoulder.

The pickup was pulling a large piece of equipment used in gas line work, according to the coroner and witnesses at the scene.

The airbags on the pickup deployed and the driver was checked by fire paramedics at the scene but was not taken to the hospital, Ginn said.

FAYETTE/SCOTT COUNTY LINE/ Ky. (WTVQ) — The three-vehicle accident on Leestown Road was a head-on collision with one vehicle crossing the center line and hitting another, 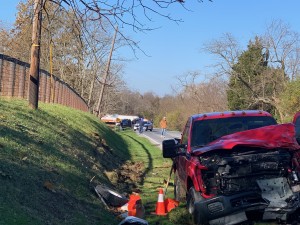 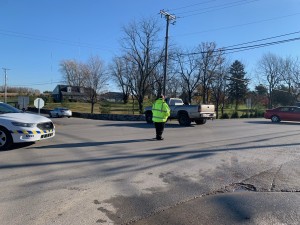 The road remains closed in both directions at the Scott County line and will be closed for several hours while the accident is investigated and vehicles cleared.

FAYETTE/SCOTT COUNTY LINE/ Ky. (WTVQ) – Lexington Police, Fire and first responders are on the scene of an apparent fatal three-vehicle accident involving an 18-wheeler on Leestown Road (Highway 421) at the Fayette/Scott County line.

The road is shut down in both directions and outbound traffic is being diverted on Yarnallton Pike. The accident was reported just after 9 a.m. and as of 9:45 a.m., the road is expected to be shut down for at least two to three hours, according to police.

A coroner has been called, police on the scene said.