Accused armed robber captured after being on the run from authorities

CORBIN, Ky. (WTVQ) – A man accused of using a hammer to rob a store in Williamsburg was arrested in Corbin after being on the run from law enforcement, according to the Whitley County Sheriff’s Department.

Deputies say an anonymous tip led them to Henry Barton Road in Corbin on Tuesday where Bobby Canada was arrested.

He’s accused of walking into the Canada Town Market on Highway 204 in Williamsburg armed with a hammer.  Deputies say he destroyed a gaming machine with the hammer and took cash out of the machine.

Investigators say when the clerk confronted Canada, he reportedly threatened the employee with the hammer and ran out with the cash.

She was arrested and charged with hindering prosecution or apprehension second-degree.

Both Canada and Hatfield are from Williamsburg, according to deputies. 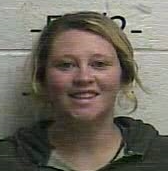