The US Marshals Service, Kentucky Department of Corrections Probation and Parole and Office of the Fayette County Sheriff held the operation from July 26-27 to ensure supervised, registered sex offenders were compliant with applicable laws, registration requirements and conditions of their probation/parole, according to a press release.

Over the two days, the Division of Probation and Parole seized several items that violated the sex offenders’ condition of supervision, from unreported/unmonitored devices to a handgun. Thirteen offenders were arrested for these violations and one of the 13 received a new felony charge.

“This multi-agency operation has been more than successful. The coordinated efforts of all agencies resulted in the apprehension of non-compliant offenders. In addition, two active warrants and three charges involving narcotics and firearms violations were made. This operation should send a strong message that non-compliance will not be tolerated in Fayette County or anywhere else in the Eastern District of Kentucky,” said US Marshal Norman Arflack. 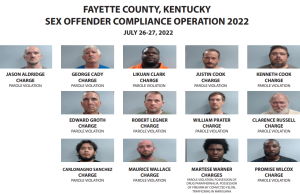 Courtesy: US Marshals Service, Kentucky State Probation and Parole, and Office of the Fayette County Sheriff

According to the sheriff’s office, there are 456 registered sex offenders living in the county right now, with the majority unsupervised.