FRANKFORT, Ky. (WTVQ) – With the state Legislature poised to pass legislation that could  make historic horse racing slot machines fall within the state Constitution, possibly as early as this week, a coalition of education, health, community and other organizations say any legislative action on HHR must include increasing deeply inadequate tax rate.

A coalition of 17 diverse Kentucky organizations including the Kentucky Education Association, Jefferson County Teachers Association, a variety of health groups and the Kentucky Center for Economic Policy sent a letter to lawmakers Monday saying any action taken on Historical Horse Racing slot machines in the 2021 Kentucky General Assembly must include raising the artificially low existing tax rate.

See the full letter below:

In September, the state Supreme Court ruled unanimously that “historical horse racing” (HHR) slot machines do not meet the legal definition of pari-mutuel wagering, and therefore do not fall within the limited category of gambling legally permitted in Kentucky. The General Assembly is expected to consider legislation that will redefine such wagering to try to make these machines lawful.

If the legislature does take action, it must also address the fact that these slot machines are vastly under taxed compared to slot machines in other states and compared to other forms of gambling in Kentucky. Legalizing this activity but failing to adequately tax it will continue to shortchange schools, health care, infrastructure and other vital services while giving the green light to further expand this rapidly-growing form of gambling across the commonwealth.

Kentucky’s tax on HHR slot machines is 1.5% of handle (the amount of money that bettors wager), or approximately 18% of gross commission, which refers to the industry’s income after paying out winnings. Of that amount, only 8% goes to Kentucky’s General Fund with the other 10% of going back to the industry to support purses and other industry endeavors. Especially because these machines are in operation and appearance like slot machines, they should be taxed like slots in recognition of the associated social costs and to ensure the commonwealth’s public services are getting a fair share.

The tax rates in other nearby states on slot machines are much higher than in Kentucky. For example:

Kentucky’s tax rate on these machines is also significantly lower than the tax on live horse racing at a comparable level of handle, with HHR being taxed at just 1.5% of handle while tracks with an average daily live handle of over $1.2 million are taxed at a much higher rate of 3.5% — 133% higher.

This issue has become even more important as the number of slot machines has proliferated rapidly in recent years across the commonwealth as and the industry constructs new facilities for the purpose of offering slot machines to patrons. Even while Kentucky has had a decades-long debate on whether or not to allow casino gambling, casinos have, in fact, been quietly introduced in the form of HHR.

These machines surpassed $1 billion in handle state-wide in 2013 and are on track for over $3 billion in handle this year (see graph below). Thousands of additional machines have also been approved by the Kentucky Horse Racing Commission. This form of betting now far exceeds the state Lottery through which $1.2 billion will be bet this year. Yet Kentucky collected $271 million in General Fund revenue from the Lottery in 2020 and only $15 million from HHR slot machines. That’s because approximately 70% of gross commission from the Lottery goes to the state’s budget compared to only 8% for HHR slot machines, as described above. 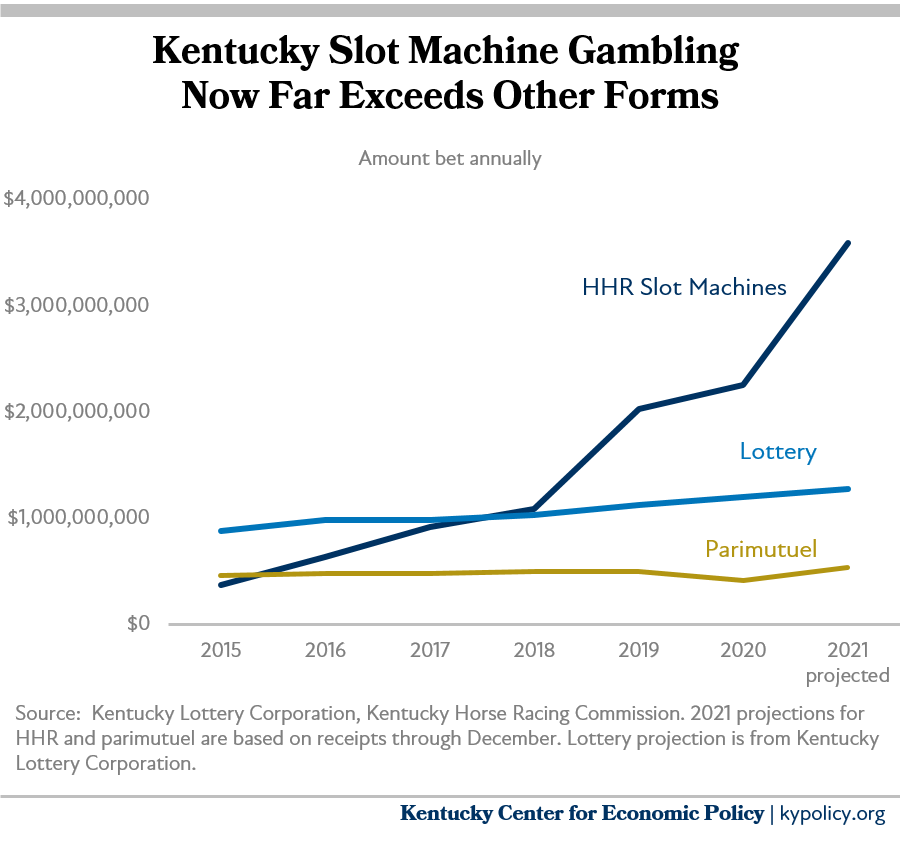 It is not clear if any legislative change made by the General Assembly permitting HHR machines to continue operating will withstand another legal challenge. But if the General Assembly makes that attempt, it must include increasing the tax to take into account the social costs associated with these machines, and to make our tax comparable to the tax on such activities in other states. Doing so could raise up to approximately $90 million annually for the state’s General Fund according to the Legislative Research Commission, and the amount will grow as more machines are deployed. Failing to do so, but widening the definition of pari-mutuel wagering, will allow the continued proliferation and growth of casino-type gambling throughout the commonwealth without the associated benefit to Kentucky’s budget.

Thank you for your consideration of this issue.

Homeless and Housing Coalition of Kentucky