“The FBI will collect all available facts and evidence and will ensure that the investigation is conducted in a fair, thorough and impartial manner,” FBI Louisville tweeted Thursday.

Due to a number of media requests, FBI Louisville is issuing the following statement. 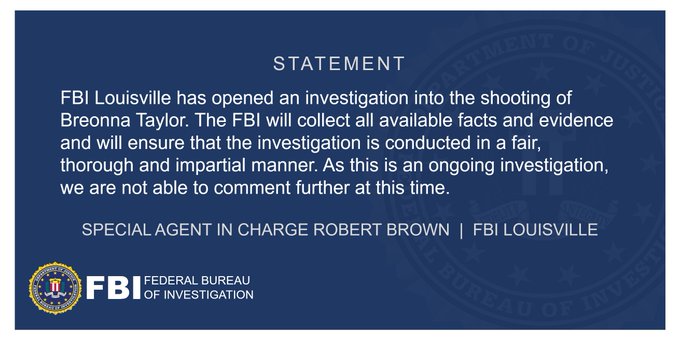 Taylor was shot and killed in March when police executed a no-knock search warrant at her apartment.
Also Thursday, Mayor Greg Fischer announced Police Chief Steve Conrad intends to retire at the end of June.

“It has been the highlight of my professional career to be Louisville’s police chief,” said Chief Conrad. “LMPD is full of amazing men and women who come to work each day to do their best for this community and it has been a privilege to lead them.”

Conrad also sent an email to the department.

“You all are weathering a lot right now and I know how challenging this is,” Conrad said. “Approach this as we approach all our struggles – as a team. Look out for each other. Show compassion to the community, even when it might not be shown to you. And remember what a privilege this job is,” he wrote.

Col. Robert Schroeder will serve as Interim Chief of LMPD.

“The resignation, today, of Louisville Metro Police Department Chief of Police Steve Conrad was a significant step forward in getting justice for Breonna Taylor, her family, and the city of Louisville. But this is just the beginning of that journey.

We look forward to further investigation, including by the FBI, into the chain of events that led to Breonna’s tragic and preventable death. It is our expectation that the next Chief of Police will be someone who wears the badge with honor, moves the police department forward, and nobly protects and serves the residents of Louisville.

While today marks an important milestone, the fight has just begun. We will not rest until everyone involved is held accountable, and Breonna Taylor gets the justice she so deserves.”

The police department has completed its own investigation into the deadly shooting and given its findings to the FBI, U.S. Attorney and Kentucky Attorney General Daniel Cameron.