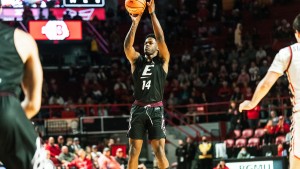 University held on for an 85-80 victory on Saturday in Bowling Green.

With the game tied 71-71 and 4:18 on the clock, Jannson Williams knocked down a 3-pointer from the right corner, EKU’s 17th of the game to break the Diddle Arena record of 16 set by Louisville.  A free throw by Braxton Beverly with 3:40 to go gave Eastern Kentucky a 75-73 lead.  However, back-to-back baskets from Dayvion McKnight and Jamarion Sharp swung the lead to the Hilltoppers, 77-75.

After a lay-up from Michael Moreno with 2:06 remaining tied it for the final time, 77-77, Camron Justice scored the next four points for Western Kentucky, hitting a lay-up and two free throws to stretch the margin to four, 81-77.  Two free throws from Sherman Brashear with seven seconds left capped a 6-0 run and secured the win.

Cooper Robb tied his season-best with 21 points.  He went 7-of-14 from 3-point range.  Moreno had 14 points.  Devontae Blanton finished with 14 points, 10 rebounds and five assists.  Beverly had 11 points, six assists and four rebounds.

McKnight led all players with 22 points for Western Kentucky (5-3).

Eastern Kentucky went 18-for-51 from long range (35 percent).  The Hilltoppers shot 52 percent from the field for the game.

The Colonels started hot, using four 3-pointers to jump out to a 12-5 lead.  Moreno got it started with a triple from the right corner after Robb drew a charge on WKU’s first possession.  Robb then hit on three 3-pointers.

EKU took the lead right back with back-to-back 3-pointers by Williams and Curt Lewis.  The shot by Lewis from the left wing put the visitors back in front 24-22.  Neither team led by more than three the rest of the half.  WKU took a 39-38 advantage into the locker room at the break.

The Hilltoppers scored the first five points of the second half to go in front by six, 44-38.  However, just as he did to start the game, Robb got hot from long range.  After a jumper from Moreno, Robb knocked down back-to-back three’s to complete an 8-0 spurt and swing the lead back to the Colonels, 46-44.

A 3-pointer from Luke Frampton stretched the Western Kentucky margin to five, 58-53, and another triple from Frampton put the Hilltoppers ahead by eight, 63-55 with 10:36 left in the game.

Eastern Kentucky didn’t fold.  Four 3-pointers, two straight from Blanton and one each from Beverly and Lewis, got the Colonels within one, 68-67, with 7:03 to play.

Eastern Kentucky will play at undefeated and 18th-ranked Southern California on Tuesday.  Tip-off in Los Angeles is scheduled for 10 p.m. ET.

Report: Chris Mack may have coached his last game at Louisville