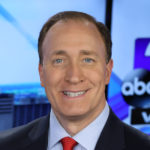 Tom Kenny joined ABC 36 News in June of 2001 as a General Assignment Reporter. A native of Peoria, Illinois, he graduated cum laude with a Bachelor of Arts in Mass Communications from Western Illinois University. He currently anchors ABC 36 News at 5pm, 6pm and 11pm. Tom has more than three decades of experience in broadcast journalism. He is the only broadcast journalist in Lexington television history to be honored with a national Edward R. Murrow Award. Tom was recognized for reporting on a story that gave a rare glimpse inside the secretive world of the Federal Witness Protection Program. He has won an Emmy Award for anchoring and another for investigative reporting, exposing the deceit and potential danger of online diploma mills. Tom has ten other Emmy nominations to his credit for investigative and feature reporting. He has won Associated Press Awards for reporting and anchoring. He has won two Addy Awards for excellence in promotional writing. Tom was the first broadcast journalist in Lexington TV history to be awarded the Silver Circle Award by the National Academy of Television Arts and Sciences. It is one of the highest honors given by NATAS. It recognizes television professionals who have performed distinguished service within the television industry for 25-years or more. Tom was honored for more than his longevity, he was recognized for making an enduring contribution to the vitality of the television industry and for setting high standards of achievement. He was also recognized for giving back to the community as a mentor, educator and volunteer. Tom also has network broadcast experience in radio and television having worked as a sports reporter for ESPN, Sportschannel, NBC Sports and the Breeders’ Cup. He was also the studio host and halftime producer for CBS Radio Sports’ College Football Game of the Week and covered the NFL for One-On-One Radio Sports. Prior to joining WTVQ-TV, Tom was Vice-President of the Houston Astros Minor League baseball team in Lexington. He was part of the original management team that brought professional baseball back to the Bluegrass after a nearly 50-year absence. Tom has lived in Lexington since 1984. In that time, he has been heavily involved with dozens of charity and civic groups, with a special emphasis on helping Veterans. He can be reached at tkenny@wtvq.com. You can also follow Tom on Facebook www.facebook.com/TomKennyABC and Twitter @TomKennyNews. Just click on the links at the top of the page.

Motorcycle Wreck On I-64 In Montgomery County

Portion Of Leestown Road Shutdown Due To Water Main Break

New State Police Cruisers Will Be Chevys Instead Of Fords

Chester Grundy Laid Off At U.K. After Three Decades

‘City Barbeque’ To Open In Lexington This Friday

Limiting Use Of Lasix Debated At Town Hall Meeting

Coal Miners And Environmentalists On Collision Course At EPA Hearing

SUV Stuck In The Mud Leads To Arrest